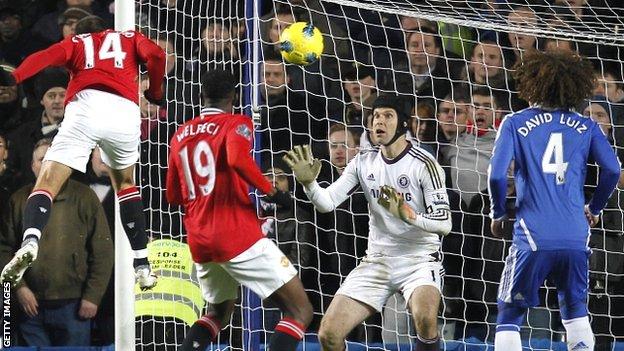 Manchester United staged a stirring fightback from three goals down to earn a point against Chelsea at Stamford Bridge.

Sir Alex Ferguson's champions are without a Premier League win at Chelsea in a decade - and they looked condemned to another defeat as Chelsea took total control early in the second half.

Jonny Evans's own goal gave Chelsea an interval lead against the run of play before a stunning volley from Juan Mata 24 seconds after the restart and David Luiz's deflected header appeared to give Chelsea an unassailable advantage.

United's hopes were then revived by two penalties awarded by referee Howard Webb - both converted by Wayne Rooney - before substitute Javier Hernandez's header six minutes from time gave them a point that was greeted in the manner of a victory by their travelling support.

Even then, United were indebted to much-maligned goalkeeper David de Gea for a magnificent save from Mata in the dying moments and another less spectacular - but equally important - fingertip stop from Chelsea debutant Gary Cahill.

The draw leaves United two points behind leaders Manchester City and this may ultimately be viewed as two points lost, but the point they gained could equally be taken as a bonus given Chelsea's three-goal lead.

It was also an indication that while United may not possess the all-round quality of old, they do have the persistence and experience to hound neighbours City all the way to the finishing line.

For Chelsea and manager Andre Villas-Boas, however, this was the opportunity to take a firmer grip on a place in the top four squandered as they looked defensively fragile without deposed England captain John Terry, who was out injured, and suspended Ashley Cole.

Terry's removal as England captain provided a sub-plot to the action as Rio Ferdinand was booed throughout. Terry is scheduled to stand trial in July on charges of racially abusing Ferdinand's brother Anton, for which he has entered a not guilty plea.

United boss Ferguson was as animated as anyone in the opening exchanges, almost making his way on to the pitch in a rage when referee Webb failed to penalise Cahill as he tangled with Danny Welbeck on the edge of the area.

And as United continued to edge a cagey encounter, Branislav Ivanovic was forced into a crucial sliding tackle as Welbeck waited to turn in Rooney's inviting low cross.

So it was against the run of play that Chelsea took the lead nine minutes before the interval when Evans unwittingly deflected Daniel Sturridge's near-post cross beyond De Gea.

United's response was that of a team believing the scoreline was an injustice, with Chelsea keeper Petr Cech saving from Welbeck and Rooney in quick succession.

And United's pain increased inside a minute at the start of the second half when Fernando Torres's long cross was met sweetly at the far post Mata, whose magnificent volley flashed high and powerfully beyond the helpless De Gea.

"When Chelsea went 3-0 up you thought 'that is it, game over'. But, as we know, United never give up. They got back in it with a soft penalty and then got another one which for me was not a penalty. That could be a turning point for them in the season."

Chelsea seemed out of sight four minutes later when Luiz's header from a Mata free-kick took a decisive deflection off Ferdinand to wrong-foot De Gea and land in the top corner.

As Stamford Bridge started the celebrations, United responded and were back in business from the spot after 58 minutes.

Villas-Boas was furious, hurling a plastic bottle to the ground, when referee Webb pointed to the spot after Sturridge clumsily clashed with Patrice Evra, although his frustration may have been directed at his own player rather than the official.

Rooney scored emphatically and he was on the spot again when Webb decided Welbeck had been fouled by Ivanovic, although contact was minimal.

With Chelsea now protecting a narrow lead, and with the more defensive Oriol Romeu on for a dissatisfied-looking Sturridge, United sensed they could secure an unlikely point and it duly arrived in the closing stages.

Cech did superbly to claw away Rooney's effort, but when Ryan Giggs returned the loose ball from the left flank, Hernandez sent in a header that Chelsea's keeper touched but could not keep out.

Chelsea almost snatched back victory only to be denied by De Gea - and there was no doubt United's fans were the happier when Webb sounded the final whistle on an enthralling game.