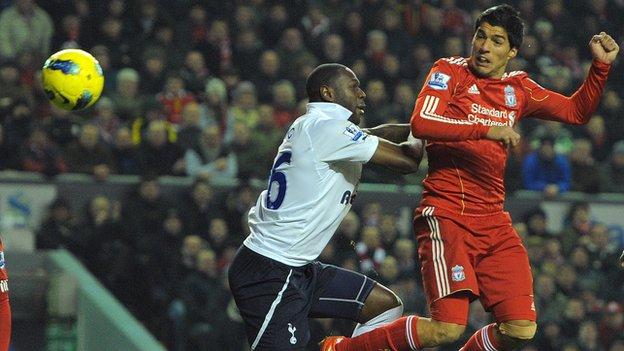 Luis Suarez's return failed to inspire Liverpool as they were held to a draw by Tottenham in a drab Anfield stalemate.

The Uruguayan returned as a second-half substitute to a rapturous reception after serving an eight-game suspension imposed by the Football Association for racially abusing Manchester United's Patrice Evra.

Suarez made an impact three minutes after coming on - but only by earning a yellow card from referee Michael Oliver for a wild kick in Scott Parker's midriff that carried the risk of greater punishment.

Spurs boss Harry Redknapp failed to attend the game after his flight from London's City Airport was cancelled, although England coach Fabio Capello was in attendance at Anfield.

In Redknapp's absence, assistant Kevin Bond was in charge as Tottenham attempted to maintain their interest in the Premier League title.

Redknapp will have been delighted by the defensive organisation and resilience shown by his side, but they lacked their trademark attacking threat and it was Liverpool who shaded a dour encounter.

Spurs still had the best chance of the night, however, when Gareth Bale raced clean through with only six minutes left but shot straight against the legs of Liverpool goalkeeper Pepe Reina.

Suarez also had the opportunity to mark his return with a goal when he met Steven Gerrard's free-kick from close range but, perhaps with an element of ring rust, he could only head straight at Spurs keeper Brad Friedel.

Andy Carroll worked hard up front for Liverpool, but his luck was out again in front of goal and he was unable to convert a late chance.

It was a result that served neither side's purpose as Spurs chase the Premier League pace-setters and Liverpool pursue a place in the top four - but it was clear at the final whistle that the visitors were happier with a point.

Redknapp did not miss much in a dull first half - the most noteworthy moment being the appearance of a cat that held up play for a couple of minutes before it was rescued by a steward.

Liverpool created what serious danger there was with Glen Johnson prominent. Spurs keeper Friedel needed to react quickly to block his cross and saved from the England defender with his legs in the final action of the half.

In between, Jay Spearing was only inches away with a swerving 25-yard shot while Parker was booked for a foul on England colleague - and some suggest rival for the captaincy - Gerrard.

Bale, who had been kept quiet by diligent Liverpool defence, was booked early in the second half following a clash with Daniel Agger, who was angry at what he regarded as a dive after a collision near the touchline.

Liverpool continued to keep Friedel occupied while Reina was relatively unemployed, the Spurs keeper diving away to his left to save Martin Kelly's rising shot at his near post after 58 minutes.

Suarez finally made his entrance with 24 minutes remaining, replacing Dirk Kuyt to a standing ovation from Liverpool fans delighted to see the return of the Uruguayan striker.

And he made an impact inside three minutes when he was booked by referee Oliver for delivering a painful kick in Parker's direction that left him floored.

Spurs made a change of their own, sending on former Everton striker Louis Saha for his debut in place of the subdued Emmanuel Adebayor.

Liverpool then created, and wasted, their best chance of the night with 17 minutes left. Kelly's cross landed at the feet of Carroll 10 yards out but he rushed his finish and sent it high into the Kop, much to Spurs' relief.

Spurs final broke through Liverpool's defence with six minutes left as Niko Kranjcar sent Bale through on his own, but his usual composure in front of goal deserted him and Reina made a crucial stop.

Suarez then had a clear opening of his own from Gerrard's delivery but he headed straight at Friedel, to his very obvious disappointment.

It was the final meaningful action as Liverpool were left frustrated by their eighth draw at home in the Premier League this season.