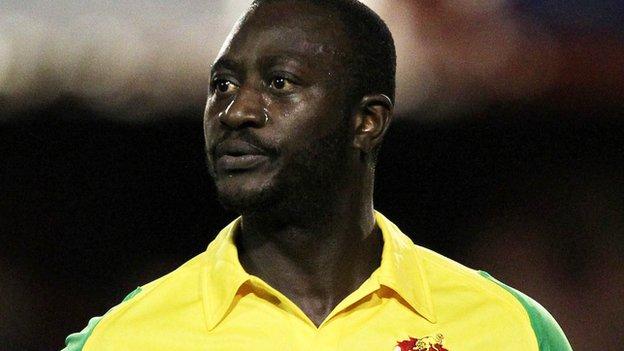 Tamworth have cancelled Jean-Paul Marna's contract - just 10 months after he joined the Lambs from Kettering.

The 31-year-old Senegal-born striker hit four goals in 11 games for Tamworth last season after ending his six-year stay with the Poppies in January.

But he suffered an Achilles injury early on in Tamworth's third game this season and has managed just one brief appearance off the bench since.

Marna, who was once on the books at Paris St Germain, hit 47 goals in his 94 league starts for Kettering before being loaned to Corby this time last year because of the Poppies' financial problems.

But he will perhaps be best remembered for being sent off for fighting with co-striker Moses Ashikodi after a missed penalty in a 5-3 defeat by Hayes & Yeading in September 2011.

A club statement said: "Jean-Paul Marna has left the Lambs by mutual consent and will return back to France in the next day or two to spend his first Christmas for seven years with his family.

"Jean-Paul has been sidelined with an Achilles injury for most of the season and with no visible improvement it was agreed it would be in the best of interests for both parties that he returned home to rest and prepare for the 2013-14 season."