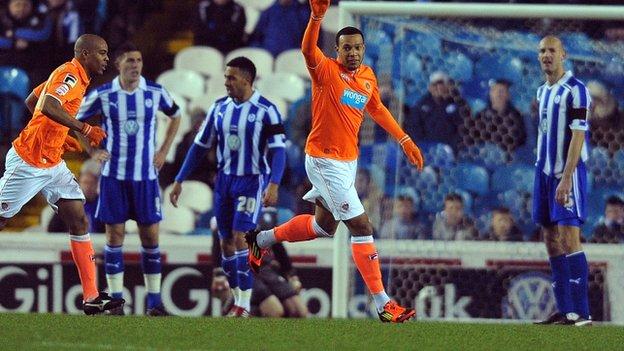 Matt Phillips steered in a low shot on seven minutes after an earlier effort by Wednesday's Ryan Lowe was saved.

Lomana LuaLua then curled one into the top corner from the edge of the box seven minutes later.

And Ludovic Sylvestre put the game beyond reach when he collected Phillips's backheel to score similarly in the second half.

Phillips could easily have scored again but shot wide, as Blackpool underlined their growing status as a team coming into form at the just the right time of the season.

Ian Holloway's side are now unbeaten in eight games and are fourth in the Championship as they push for promotion to the Premier League after being relegated last season.

But with this display they will give Everton a good test in the next round such was the fluidity of their attacking.

ON THE ROAD TO WEMBLEY?

Kevin Phillips, 38, was at the heart of much of their good work with some clever touches and a long-learned appreciation of space.

And although Wednesday could have taken the lead when a mistake by Alex Baptiste allowed Lowe to venture clean through on goal, it was Phillips's namesake who made the breakthrough.

Blackpool broke down the left and when LuaLua's shot was stopped, the ball fell to Matt Phillips on the edge of the area, and he found the bottom corner with a bobbling shot for his 10th of the season.

The goal breathed confidence into Holloway's side and it was from another counter attack that LuaLua scored a wonderfully taken second goal.

Goalkeeper Matt Gilks played his part by throwing the ball quickly to the Congolese forward, and although he was fortunate to play a one-two with Kevin Phillips, he strode towards the edge of the box to curl into the top corner past Stephen Bywater.

Understandably the finish left Gary Megson's team deflated, but they managed to claw their way back into the game with Rob Jones drawing a good Gilks save with a header from a corner.

However, it was the Tangerines who continued to pose the biggest threat with their front four of Thomas Ince, LuaLua and the two Phillips's causing problems every time they broke.

Kevin Phillips, in particular, was finding lots of space in between the Wednesday midfield and defence and it made Megson introduce Jose Semedo at the break to try and close the veteran striker down.

It appeared to be having an effect although when Liam Palmer lost the ball Blackpool broke again and put the game beyond Wednesday's reach in an instant.

Matt Phillips backheeled the ball on to Sylvestre and with the home defence backing away, the French midfielder mirrored LuaLua by curling into the far right corner to book a place in the next round.

Blackpool might have made it 4-0 but Matt Phillips was off-target after being put through by LuaLua and although Lowe shot wide too, Wednesday will return to their League One promotion chase having been outclassed.

Sheffield Wednesday boss Gary Megson: "It's obviously disappointing. It's nowhere near where we can play in and out of possession and we got a footballing lesson. I thought we were a yard short during the game and once they got the ball, they passed through us.

"If we have any pretensions of playing in the Championship, that's the sort of team we are going to play against week in week out."

Blackpool boss Ian Holloway: "I'm delighted with the lads, it was absolutely terrific and very professional from the off. It's not my main team, but my squad are growing, they understand what we are trying to do.

"That's as complete a performance as I've seen from Matt Phillips tonight. He attacked and did his defensive duties and he's English, and you seem to get more [money] for English players don't you?"