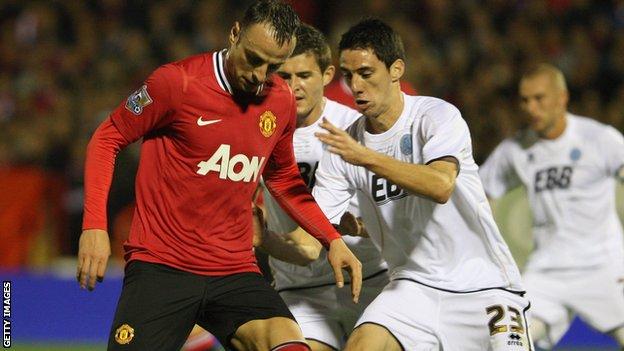 The 25-year-old, who started his career in the island, watched Guernsey FC beat Egham Town 5-2 on Tuesday.

They entered the English football pyramid this season, but Jersey authorities decided not to follow their Channel Islands rivals.

"You play the same competitions every year and it gets a bit stale at times," Vincenti told BBC Radio Jersey.

"You look at Guernsey, they're doing fantastically well and are top of their league at the moment.

"I've kept an eye on them and they're getting over 1,000 people to their home games and you can't argue with that."

While Guernsey FC compete weekly against English opposition, Jersey's Football Association has said there is no mandate for them to follow suit.

Vincenti, who played for St Peter and Jersey, said: "I think Jersey need to move on.

"I know they could've had a chance back in 1993 when they won the Island Games and they missed a chance there.

"I feel as if they need to do something."

Jersey, Guernsey and the Isle of Man are set to meet Gibraltar's FA later in February to discuss a potential new summer tournament.

The four teams are keen to increase the number of fixtures they play outside of the bi-annual Island Games.