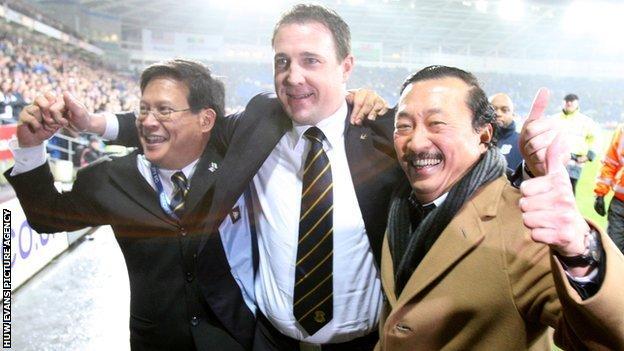 Cardiff City manager Malky Mackay said the failure to sign his principal January transfer targets was not down to a lack of available funds.

The Bluebirds failed with bids for Craig Noone and Matt Phillips, while a reported £3m deal for Marvin Sordell fell through at the last minute.

But Mackay said he could not have wished for better support from the club's owners as he chased his targets.

"It's fantastic the way our Malaysian owners have tried to help," he said.

Mackay's ambition had always been to add "two or three" players to his squad, with signing wingers a particular priority.

Brighton's Noone emerged as the key target, and Cardiff are believed to have increased their offer after an initial bid of £500,000 in early January was rejected.

Cardiff's attempts to strengthen the squad intensified on transfer deadline day, culminating with one "substantial" bid for a player Mackay chose not to name.

That player is believed to have been Watford striker Sordell, who joined Bolton Wanderers for an undisclosed fee in one of the last deals on deadline day.

"We've hit the post twice and there was one bid that was substantial in terms of how the club tried to back me with that one.

"I'll keep my counsel on that one just now. We've been close on a couple of occasions but I would imagine we would look to go into the loan market as and when the window opens on 7 February.

"It was always going to have to be the correct one. I'm not bringing people in here just for the sake of it.

"We had our targets and some came and went. It wasn't for want of professionalism at the football club, or trying or finances in the way I was backed."

Cardiff's only signing in January was 18-year-old winger Kadeem Harris from Wycombe Wanderers, while striker Jon Parkin left to join Scunthorpe on loan and defender Gabor Gyepes has been released.

Mackay revealed that no offers were received for any of his players, and was delighted to be able to prove their determination to hold onto midfielder Peter Whittingham.

"I told you that our Malaysian owners said categorically he wouldn't be leaving the football club in the January transfer window," he said.