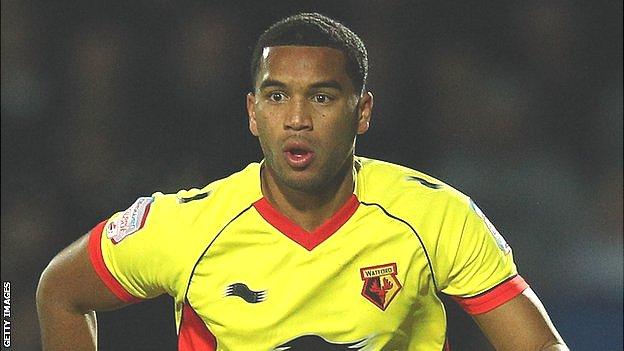 Watford boss Sean Dyche has hailed the "immaculate professionalism" of Adrian Mariappa amid speculation regarding the defender's future.

The 25-year-old was chased by Wigan and Newcastle on Tuesday but played in the 2-0 Championship win at Millwall.

"There was a lot going on in that man's life and to give a focused performance like that just goes to prove what an immaculate professional he is."

Neither Wigan or Newcastle were able to agree a fee for the centre-half, despite reports suggesting that a deal had been arranged.

And while Mariappa was told he would be remaining at Vicarage Road at least until the summer, striker Marvin Sordell was finalising a last-gasp move to Bolton Wanderers.

Dyche learned of the deal 90 minutes before kick-off at the Den and was told by club owner Laurence Bassini that the England Under-21 international would not be available to face the Lions.

"It's a reality of life at Watford. People have to make decisions here and decisions were made," Dyche explained.

"The team were amazing. I literally had to change the team at the last second in the team meeting.

"We were waiting. I was on the phone. I had to change the team, change the set pieces, reorganise, reshuffle and the team go and give a performance like that.

"Every Watford supporter should be so proud of that group and I certainly am."

Meanwhile, Bassini has explained why he agreed to sell Sordell.

"Unfortunately, you cannot protect your own players from external and third-party influences when it comes to what might be best for their future career," he told the club website.

"We made an offer to double Marvin's wages, however his agent advised that this wouldn't be considered and that they'd simply let his contract run down.

"We also had approaches from other clubs, including Cardiff City. Given what has happened in the two clubs' recent history, the chances of striking a deal there were remote to say the least."