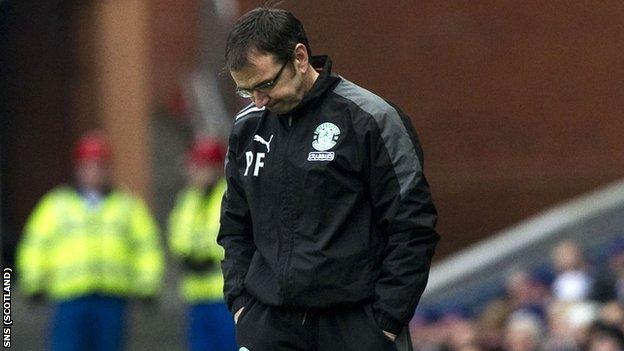 Hibernian legend Pat Stanton insists that fans need to give manager Pat Fenlon the support required to lift the Edinburgh club out of their slump.

Fenlon added nine players to his squad in the January transfer window - while six left - and Stanton says the new crop need to get up to speed quickly.

"It's a difficult time to bring in players, as the end of the season is not far away," said Stanton.

"They have to get a quick response from them and the fans to get behind them."

Hibs have won only one of their 10 league matches under Fenlon since he took over from sacked Colin Calderwood in November, leaving them just one point ahead of bottom-placed club Dunfermline with only 14 games left to play this season.

I just want to see them do well - I'm a Hibs supporter - in my eyes, they're not just some other club - they're a big club and they're having a difficult time, which is lasting a bit too long for my liking

"Something had to be done," said Stanton. "Hibs' position in the league at the moment has been going on for a long time, so I'm pleased that they made a move, because the players that were there were not going to respond or get the club out of that position.

"One thing I am wary of is that in the past, they've brought in groups of players, and - quite honestly - they didn't match up to the demands at Easter Road.

"I always feel that if you bring players in the first couple of weeks and you think you have a couple of stars, then after the next couple of games you see their real form, and you find out why they've not had a club.

"That's what worries me about bringing in players at this time of the year."

Stanton, who played for Hibs from 1963-1976 and made almost 400 appearances before becoming manager in 1982, also said it was important for the club to try and hold on to Fenlon and give him time to make his mark.

"Pat Fenlon has a difficult job, and he has to deal with the demands that the supporters have," said Stanton. "They have to get behind the man - because the time for talking is over.

"The players have got to respond to the man and give him a chance, hit the ground running and see where it takes us.

"But it's not all down to one man. The die was cast a while ago, and it'll take him some time to sort it out. People have got to be patient.

"I just want to see them do well - I'm a Hibs supporter - in my eyes, they're not just some other club, they're a big club and they're having a difficult time, which is lasting a bit too long for my liking."