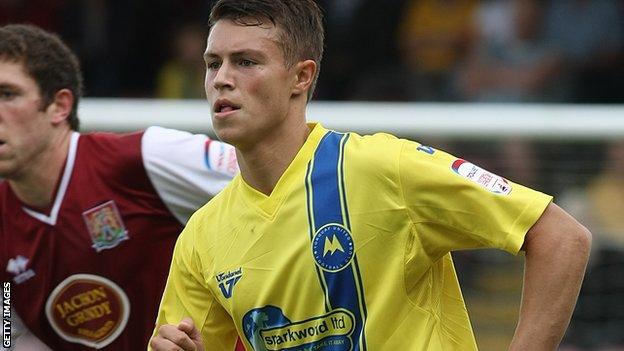 Torquay United boss Martin Ling has all but given up on bringing back Swindon youngster Billy Bodin to Plainmoor.

The 19-year-old Wales Under-21 international made a big impression at the Gulls while on loan last year, and Ling hoped to sign him permanently.

He has played twice for Swindon since returning to the County Ground, scoring in the Robins' 4-1 win at Southend.

"I think the biggest club interested in him now, if they've got any sense, is Swindon," Ling told BBC Radio Devon.

"I'm not telling Paolo di Canio how to do his job, but I've always felt he was good enough to be within Swindon's squad.

"I'll have one more phone call next week when the loan market's open saying 'are you prepared to let Billy come on loan?'

"I would expect the answer to be 'no' and I've got another four or five names in that bracket as well that I feel will come in and supplement the squad."

That is despite Di Canio hinting that Bodin could be leaving the Wiltshire club earlier this week.

"They've (Swindon) not brought anyone in during the window in that position.

"He started the first game, was an unused sub in the second one and a used sub in the third one and scored a goal, so you don't have to be a rocket scientist to work out that he's having more and more value to Swindon.

"I said 'let's enjoy him while we can' because I felt, and I still feel, that he's a first-team starter in League Two and League One."

Meanwhile Ling says he is urgently looking to bring in a striker and a central defender when the loan window re-opens, following Chris Robertson's transfer to Preston.

"I feel I need to fetch in a centre-half and a centre forward, or a forward-thinking player, off the loan market.

"It opens next week and we'll be looking to do that instantly, I'm pretty confident that with my connections we'll get someone in here that will make us steady and right for the end of the season.

"I've got a few fingers in pies and a couple of names that were chucked at me yesterday I'm quite excited by and the answer may well be here as from next week," Ling concluded.