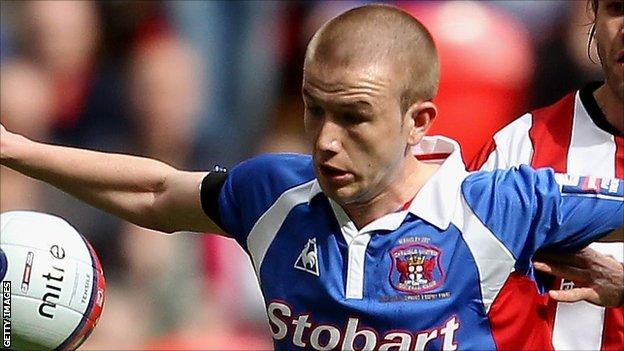 Carlisle United striker Paddy Madden has said he is ready to take his first-team opportunity after a long absence through injury.

Madden, 21, returned from a broken metatarsal in December to make six substitute appearances this term.

"I am feeling sharp and confident, so I know I can add different things to the team," Madden told BBC Radio Cumbria.

"I'm waiting on my chance because the lads have been fantastic, so it is up to me to take my chance when I get it."

United, currently on a run of one defeat in nine League One games, have lined-up in a 4-3-3 formation for much of the campaign, with Lee Miller the focal point of the attack.

But Miller's three match suspension following dismissal at Hartlepool, in addition to the absence of Craig Curran, has opened the door for Madden to return to the first XI for the first time since the 2-0 defeat by Yeovil on the final day of last season.

"I think I could play in any of the three positions, my natural position is up front in a two but I don't mind," Madden added.

"I will play right-back if you want me to play there, I don't mind playing anywhere once I am in the team.

"I suppose I could play there but obviously I wouldn't have the physical presence that Lee would have.

"I am trying to improve my game and work on my game so I can have that as well, I'm working on different aspects of my game to improve me all round."

Madden moved to Carlisle from Bohemians in January, and has since made 20 appearances, including one as a substitute in the Johnstone's Paint Trophy final in May.