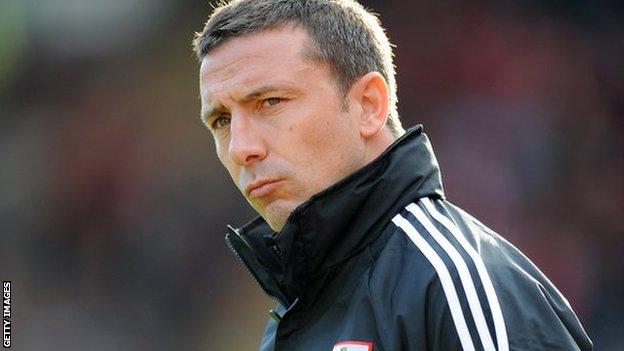 Bristol City manager Derek McInnes has insisted there is no reason to panic about his lack of striking options.

Top scorer Nicky Maynard left to join West Ham on transfer deadline day and David Clarkson will miss the rest of the season with a fractured ankle.

Ryan Taylor is out with a foot problem meaning Brett Pitman, Jon Stead and Chris Wood are City's only forwards.

"There's no real panic," McInnes told BBC Radio Bristol. "These three have all got the capability to score goals."

He continued: "In an ideal world we'd have Nicky tied up in a contract as I think he's a fantastic player. There's been a lot hanging over him of late which hasn't' t been great and it's been an issue which has clouded things at the club.

"At least we've got that situation solved and we wish Nicky all the best."

Since his appointment at Ashton Gate in October, McInnes has signed Stephen Pearson and Richard Foster on permanent deals and brought Wood in on loan from West Brom.

The Scotsman did not do any business on transfer deadline day but says the club have already enquired about making emergency loan signings.

"Do I think the three will be enough to see us between now and the end of the season? I would have my doubts about that," admitted McInnes.

"We were always looking for a couple of loans. There's been loads of phone calls but sometimes you've got to be patient to get the right ones. Hopefully our patience will be rewarded.