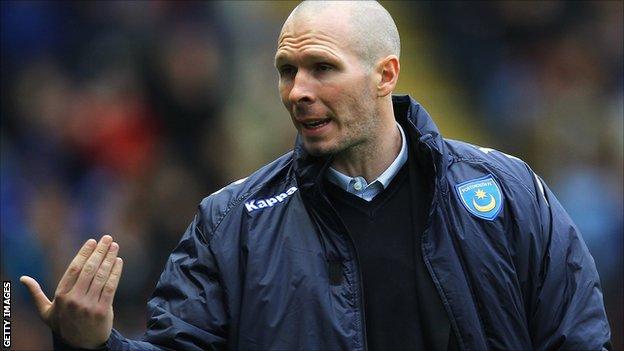 Portsmouth boss Michael Appleton was relieved to see the transfer window shut with only one player leaving.

The Championship club have been issued with a winding-up petition over unpaid tax and failed to play their players' wages last month.

But despite rumours that there could be a fire-sale of players, only Ryan Williams left, for Fulham, in January.

"I am relieved it is over and that only Ryan has left the club," Appleton told BBC Radio Solent.

Ipswich had several bids for trio Joel Ward, Jason Pearce and Stephen Henderson turned down with the players keen to stay at Fratton Park.

Pearce told BBC Radio Solent on Wednesday that part of the reason he wanted to remain at Fratton Park was because of the new manager.

And Appleton admits it was nice to have that vote of confidence.

"I spoke to all three players and the told me they did not want to leave the football club and they were happy at the club," he added.

"That was nice and from my point of view it was nice to get a pat on the back from the players. I must be doing something right.

"We've got sensible bunch of players and I was delighted to keep hold of them. I can start to think about building the squad from here."

However, Ipswich boss Paul Jewell has has not ruled out returning when the emergency loan window opens on Wednesday, when permanent deals can be put in place for the summer.

"I don't think the door is closed," said Jewell. "We were a bit against the clock as it turned into a saga."

Jewell called his dealings with Portsmouth during the January window a "nightmare" admitting he did not know whether to deal with the club's chief executive David Lampitt or administrator Andrew Andronikou over the potential transfer of Ward, Pearce and Henderson.

"It was a nightmare - were we speaking to the right people, was it the administrator or the chief executive?" said Jewell.

"It was difficult. It was a bit of a unique circumstance.

"Then the administrator would come on and say 'you have to speak to [me]'.

"And then an agent would come on and say 'I am brokering the deal'.

"It was really messy. I knew by 1600 GMT on deadline day it wasn't going to happen as I hadn't even met or spoken to the players. It was a complete nightmare."