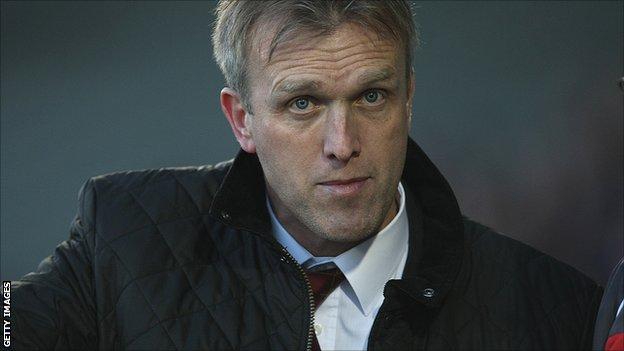 Crewe manager Steve Davis says he was relieved to see the January transfer window pass by without losing any of his talented youngsters.

Midfielder Nick Powell, the Football League's Young Player of the Month for December, was among those linked with a move away from Gresty Road.

Davis told BBC Radio Stoke: "I was pleased that nobody came in for our boys, so that's a real plus for us."

The Alex have been in good form of late, but were beaten 2-0 at Barnet in their last match and had defenders David Artell and Adam Dugdale sent off.

Davis was hopeful of adding some defensive cover to his squad for the visit of Accrington on Saturday, but was thwarted in his attempts to sign Southampton full-back Jack Saville.

The 20-year-old instead opted to sign a permanent deal with Barnet, with whom he had been on loan since November.

"I left the building on Tuesday with that deal more or less done and then I got a call to say it was off, so that was disappointing," added Davis.

"That's the way it is with this transfer window. You think you've done some business and then it gets thrown back at you.

"We move on and next week [when the window for loan signings re-opens] we can do something if we need to, so I'll be looking at that situation."

Meanwhile, a pitch inspection has been scheduled for 1030 GMT on Saturday to confirm whether the match against Accrington will be able to go ahead.