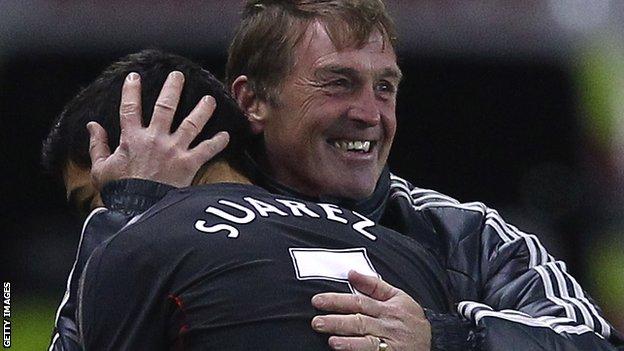 Liverpool boss Kenny Dalglish believes Luis Suarez's enforced time out of action may help keep the Uruguayan fit until the end of the season.

Suarez, banned for eight matches for racially abusing Patrice Evra, is set to return against Tottenham on Monday.

"Irrespective of what happened before, in any situation you find yourself in you have to find a positive. That is what we will try to do." Dalglish said.

Suarez has played 62 games since the start of last season.

The 25-year-old was the player of the tournament in Uruguay's Copa America success in the summer, having been a key part of the side that made the last four of the 2010 World Cup.

Prior to his nine successive matches out through suspension (he also served a one-game ban for his frustrated gesture after the Reds' 1-0 defeat at Fulham, in December, has started all but two of Liverpool's matches in all competitions this season.

Dalglish allowed Suarez to take a short break from training in January but is confident the striker is now ready to make an immediate impact upon his return.

"He's been training a couple of weeks now andstayed pretty fit, so it is fantastic for us to have him available," Dalglish added.

"There is a lot to be taken into consideration: the fact he's not played for over a month and, more importantly, how well the other players have done in his absence."

Steven Gerrard missed Liverpool's 3-0 win at Wolves on Tuesday night but will return against third-placed Spurs at Anfield.

The skipper believes Luis Suarez's impending return can be the catalyst for the Reds clinching Champions League qualification.

Liverpool, who have an FA Cup fifth round date with Brighton on 19 February before facing Cardiff City a week later in the League Cup final, are five points behind fourth-placed Chelsea.

"Luis can help us achieve what we set out to achieve - finishing top four and reaching two finals," said Gerrard.