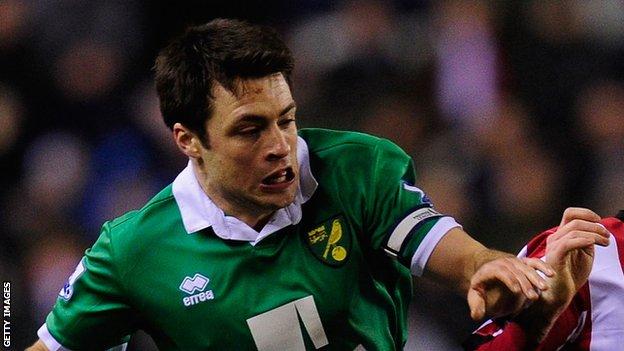 Norwich City defender Russell Martin has said his rise to the Premier League has been better than he could imagine.

The 26-year-old was struggling to get into the Peterborough United side 26 months ago, but is poised to make is 100th appearance for the Canaries.

"When I signed I didn't envisage being in the Premier League in two years and playing week-in, week-out," the full-back told BBC Radio Norfolk.

"It has gone better than you could ever imagine really."

Martin joined Norwich from Posh in November 2009, initially on loan, dropping down a division from the Championship to League One in pursuit of first team football.

He has since notched 99 games for the Norfolk club, even performing at centre-half in the Premier League this term, and will be expected to line up against Bolton on Saturday to reach his century.

"You don't get much time to reflect in football. Things move on very quickly from game to game," he added.

"A lot of us in the dressing room, when you look back you realise how far you've come. It's no mean feat.

"Unfortunately you never get a chance to stop still and take a look at it. The minute you stop and think you've done alright is the minute it will catch you up.

"It's been brilliant, superb. You run out of superlatives. But we'll carry on and hopefully this season will top it all off."

Martin played under current boss Paul Lambert for two years at Wycombe Wanderers between 2006 and 2008.

And while he took a few games to settle into life at Carrow Road, his manager says he had no doubts about the right-back's talent.

"Over the time he's been here he has been excellent," he said.

"I'm pretty sure he had a lot of doubters here. Nobody gave him a chance at the beginning thinking, 'why are we signing him?' and all that nonsense.

"But I knew he could do it. I knew what type of person I was getting in. I knew he'd be consistent."