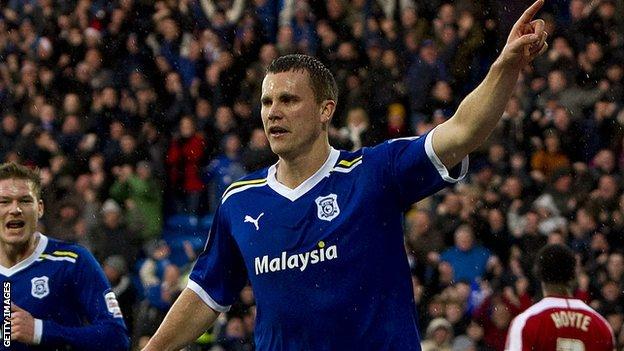 Cardiff City defender Ben Turner says he will not consider an international career with Wales until he is contacted by national boss Chris Coleman.

The former England Under-19 centre-back qualifies for Wales through his Welsh grandmother and Turner has been watched playing for Cardiff by Welsh scouts.

Turner worked under Coleman when the Wales boss was manager at Coventry.

But the 23-year-old said: "Until I'm contacted I don't really have a decision to make."

But the Football Association of Wales now plan to contact the 6ft 4ins defender officially in an effort to finally confirm the player's Welsh qualification.

Turner, who is currently keeping Wales centre back Darcy Blake out of his favoured position, has confirmed that two of his grandparents are Welsh.

Turner's performances have been impressive since his summer move to Cardiff from Championship rivals Coventry City - but he will not commit to Wales before being asked officially.

"Because I missed last season through injury, I have been that focused on playing for Cardiff," said Turner.

"I wasn't born in Wales so it hasn't been on my radar.

"I worked with Chris Coleman when he was manager at Coventry and he had a massive impact on my career because he was a former centre-half and he had a lot that he could teach me - and he was a really good guy to play for.

"I haven't thought about it, though, as no-one has contacted me so I don't really want to talk about it until I have spoken to them."

Wales' next fixture is the Gary Speed Memorial match on 29 February when Costa Rica are the friendly visitors to the Cardiff City Stadium.

Wales' next competitive match is then their 2014 World Cup qualifying opener against on 7 September.