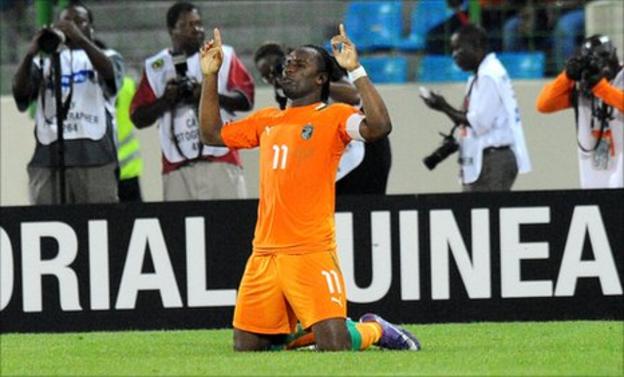 Ivory Coast powered past co-hosts Equatorial Guinea as the Africa Cup of Nations favourites won their quarter-final 3-0 in Malabo.

Elephants captain Didier Drogba was a central figure in the game, seeing a first-half penalty saved by Danilo.

Drogba celebrated exuberantly when scoring shortly after with a low strike before doubling the lead in the second half with a thumping header.

Yaya Toure rounded off the win when powering home a curling free-kick.

Looking to win their first title since 1992, Ivory Coast now travel to Libreville where they will meet the winner of Sunday's quarter-final between co-hosts Gabon and Mali on Wednesday 8 February.

Saturday's match represented uncharted territory for the National Lightning who were making their first appearance in a Nations Cup quarter-final, as opposed to the Ivorians who were contesting their tenth.

Despite this, there was the unexpected sight of empty seats at the Nuevo Estadio de Malabo even though the venue in the Equatoguinean capital can hold just over 15,000 fans.

Those inside made plenty of noise but had precious little to cheer on a night when their heroes, a collection of players from world football's lower leagues, battled against some of the biggest names on the planet.

One of those - Drogba - was immediately involved, registering his first shot on target after 90 seconds, before winger Max Gradel went close with a well-struck daisy-cutter from 25 yards.

Shortly before the half-hour, the stadium burst into life after the Elephants won a penalty, as Didier Zokora was tripped by Ivory Coast-born midfielder Ben Konate.

Up stepped Drogba from 12 yards to seemingly give Francois Zahoui's side the lead, only for Danilo to guess right - and dive right - as he pulled off a terrific save.

All around the ground, save for the small band of orange-clad Ivorian fans, the supporters erupted in disbelieving celebration but their euphoria was short-lived as the night went downhill from then on.

Just moments later, a fired-up Drogba took advantage of casual defensive play from Rui Fernando Gomez to surge into the box, cut inside two defenders and power a right-footed shot into the bottom corner.

The Chelsea man's celebration revealed his regret at missing the penalty, while the co-hosts were left with the daunting task of scoring the first goal of these finals against the Ivorians if they were to stay in the tournament.

But chances were few and far between, even if Randy was unlucky to drill a well-hit volley straight at Danilo, prompting coach Gilson Paulo to bring on a forward, Thierry Fidjeu, for a midfielder, Daniel-Bladimir Ekedo.

In truth, the co-hosts struggled to make any impact up front and the game was up when Drogba headed Yaya Toure's free-kick home from near the penalty spot - the ball timed at 70 kilometres per hour as it rocketed in.

If that was impressive, so was the way in which the provider wrapped up the points as the Manchester City man fired home a free-kick from 30 yards which arced into the top right-hand corner.

Substitute Wilfried Bony then missed two good chances but a four-goal defeat would have been harsh on a side which lit up the tournament in the group stages with some unexpected wins.

The National Lightning will now concentrate on qualifying for next year's Nations Cup as well as the 2014 World Cup and will rocket up the Fifa rankings following their unexpected wins over Libya and Senegal.