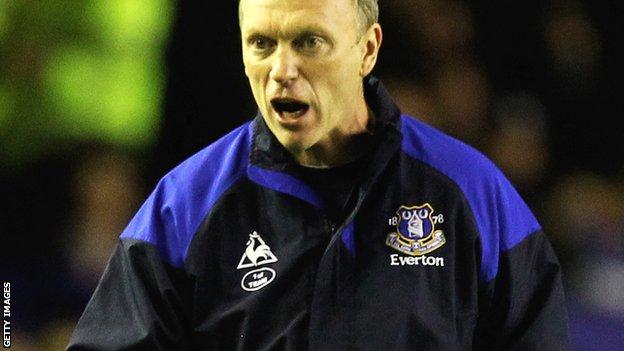 Everton manager David Moyes is optimistic his transfer deadline day acquisitions will help the team finish the season strongly but admits they will need time to settle in.

Everton beat leaders Manchester City on Tuesday, and signed Nikica Jelavic from Rangers and Steven Pienaar on loan from Spurs the same day.

"We want to finish strongly and over the years we have tended to do that."

Jelavic's arrival from Rangers cost Everton £5.5m, and they had to raise funds for new players by selling Diniyar Bilyaletdinov to Spartak Moscow, while striker Louis Saha left the club to join Spurs.

Croatian international striker Jelavic, 26, scored 36 goals in 55 appearances for the Scottish champions, and Moyes hopes he can repeat that form in England.

"Obviously we don't know how Nikica will do - there is no manager in the country who can guarantee when he brings in a player he will work, whether you pay £50m or £5m," Moyes admitted.

"I hope we are getting a centre-forward at the right age who can do numerous things but importantly scores a few goals.

Everton have played in the top flight since 1954

"He has already succeeded in Scotland, which has a British style, so hopefully he doesn't have any problem settling in.

"I hope he hits the ground running - we need it - but if not he is here for the long term and we'll be gentle with him and give him time to settle in."

United States international Landon Donovan has returned to the club on loan from LA Galaxy until mid-March and he is joined, as a returning player, by South African international midfielder Pienaar.

The 29-year-old spent three years with the Toffees from 2008-11, and has been unable to secure a regular place in the Spurs first team since moving to White Hart Lane.

Moyes said: "Steven is an important signing for us because he was someone the players held in high regard and getting him back was popular among the lads.

"We just hope we have the same Steven Pienaar who left us 12 months ago and if we have we'll have a decent player.

"He will need some game practice before he is up to speed.

"Hopefully the last few days shows, with a little bit of cash, we can try to make something work and give the supporters something to be excited about."