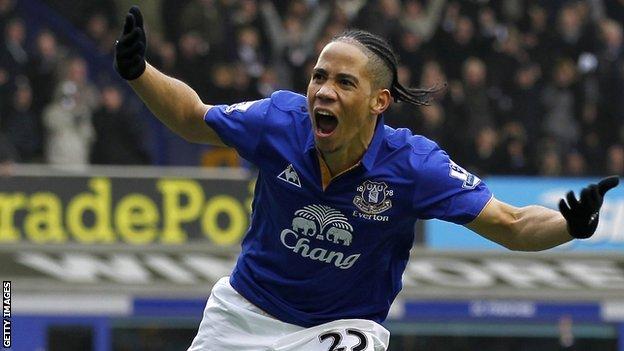 Chelsea's miserable form continued as Everton eased to victory with a sparkling display at Goodison Park.

Steven Pienaar took advantage of a fortunate break to crash home the opener inside five minutes.

Frank Lampard wasted Chelsea's best opening when he shot wide and Denis Stracqualursi sealed the win after being sent clear by Landon Donovan.

Chelsea are now without a victory in four league games and sit 15 points behind leaders Manchester United.

While Chelsea lacked fluency in attack and were often careless in defence, the hosts played with the sort of passion and drive they demonstrated in their last home game, a 1-0 win over Manchester City.

Driven by the classy Pienaar and the enthusiasm and endless running of Donovan and Tim Cahill, Everton dominated in midfield and their opener owed much to their harrying of Chelsea.

The visitors did settle midway through the first period and had a 15-minute spell in which they dominated possession and played with a cohesion lacking for the rest of the afternoon.

Juan Mata twice set up excellent chances after sneaking free on the Everton right and pulling the ball back to onrushing colleagues.

But Daniel Sturridge was unlucky to see his strike deflected narrowly over by Phil Neville, and Lampard - back in the side and named as skipper after four weeks out with a calf injury - dragged the second opportunity well wide with his left foot.

Everton continued to look comfortable after the interval as Chelsea barely mustered a noteworthy change against a perfectly organised rearguard.

As the game wore on Everton began to drop back further towards their goal, but the Londoners still failed to threaten.

Everton had a dream start, got in Chelsea's faces and played with energy and organisation. Chelsea huffed and puffed, struggled to create clearcut chances after the break and Everton were good value for their win
Steve BowerBBC Match of the Day commentator

The hosts sealed their straight home Premier League win over Chelsea 19 minutes from time - and ensured they scored twice in a game for the first time in 13 matches - courtesy of Stracqualursi.

It stemmed from a crunching tackle on the halfway line by Neville which epitomised Everton's spirit, energy and quality.

A sweeping team move began when Neville slid in on Ashley Cole, who subsequently hobbled off injured, and allowed Donovan to beat David Luiz and cleverly slip the ball through for Stracqualursi to beat Petr Cech.

"Recently we have done very well but today capped it. We played well, it was hard and Chelsea were good but we did what we do at Goodison. We are hard to beat.

"It was a great start and a great start for Steven Pienaar coming back and scoring. Chelsea came into it and had one or two chances and we had to ride our luck a little bit but we kept at it, got to half-time and got the second goal in the second half.

"We blocked and defended well and did all the things you hoped you would do. Great credit to the players, they are beginning to show what they are about. They are beginning to find the form they are capable of, and I think we can play much better and I am looking forward to that.

"Denis was terrific today. He is an old-fashioned centre-forward with a bit of hustle and bustle about him and earned his goal. But the best part of it was tackle by Phil Neville. I was nearly cheering Phil's tackle as much as the goal."

"It was one of our worst displays of the season - if not the worst. Today we couldn't be ourselves and express our football and we ended up heavily defeated.

"We saw a very, very brave Everton that showed their aggressiveness and showed great commitment to win.

"Our players showed exactly that and, if there is one defeat that the manager should take the blame, it is this one so I will go back to my pre-planning and decision-making because maybe it wasn't right to help the players.

"Everton's pressure really was hard on our back four and we spoke about it but it should be addressed by me.

"One of the things we always have is that we manage to create opportunities and this wasn't the case today. We fell very short in terms of goalscoring opportunities when a response was needed."