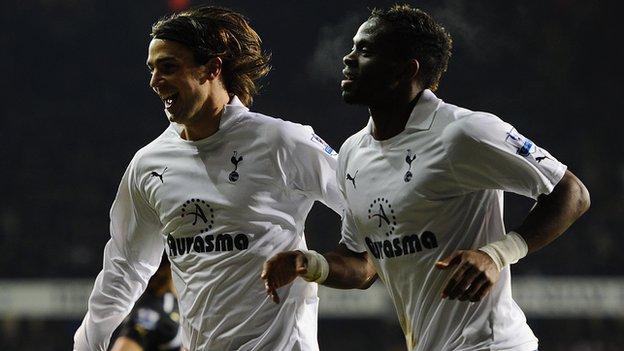 Emmanuel Adebayor played a part in all four first-half goals, squaring for Benoit Assou-Ekotto to tap in before crossing for Saha's opening volley.

The Togolese touched off a Luka Modric pass for Saha to make it 3-0 from 12 yards before Niko Kranjcar side-footed in after Adebayor's effort was saved.

Adebayor did get his goal though, volleying in the fifth after the break.

The opening 45 minutes were just what Redknapp would have wanted from his side given the extraordinary last few days he has endured.

Cleared of tax evasion charges on Wednesday, the 64-year-old remained in the spotlight for the rest of the week as the leading candidate to succeed Fabio Capello as England manager following the Italian's resignation.

It was a blistering opening by Tottenham, whose fans were still affectionately singing Redknapp's name when Adebayor exchanged passes with Gareth Bale on the edge of the box and set up the unmarked Assou-Ekotto for the simplest of tap-ins at the back post.

Redknapp had barely retaken his seat before he was up celebrating again after January signing Saha darted into the box and volleyed Adebayor's right-wing cross past Newcastle keeper Tim Krul from 10 yards to make it 2-0.

And Saha, who scored two goals in 20 games for Everton this season prior to his move to north London, made it two in 20 minutes at White Hart Lane for Spurs with another cool finish.

Assou-Ekotto started the move with a precise pass into Luka Modric who skipped into the box before finding Adebayor who in turn nudged the ball into the path of Saha and the striker nonchalantly side-footed in.

A shell-shocked Newcastle did not help themselves with numerous passes going astray and even when they did manage to forage forward, luck was against them - Demba Ba tested Spurs keeper Brad Friedel with a 20-yard free-kick but referee Andre Marriner missed the American's fingertip save and gave a goal-kick.

Tottenham looked likely to score every time they ventured over the halfway line and the fourth came after just 34 minutes when Kranjcar, who had earlier blasted an 18-yard effort over the bar, rolled in his first goal of the season from 15 yards after Krul kept out Adebayor's low shot.

Almost one year ago to the day, Newcastle fought back from 4-0 down to draw 4-4 with Arsenal at St James' Park but any half-time thoughts the travelling Toon Army may have had or a repeat showing were expunged when Adebayor scored a goal his performance so richly deserved with 25 minutes remaining.

The striker swivelled and volleyed on the turn after Saha had flicked on Assou-Ekotto's cross.

It proved to be Saha's last meaningful contribution as Redknapp replaced him and Bale with Aaron Lennon and Jermain Defoe, both of whom wreaked more havoc with their pace.

However, it was Newcastle who should have scored the sixth goal of the game. Danny Guthrie's teasing ball into box was met by Ba but his powerful header was well saved by Friedel and, with the goal at his mercy, Dan Gosling scooped the rebound over the bar.

Adebayor fired inches wide and cleared the crossbar with another effort while Krul kept out a fiercely struck Modric effort as Tottenham pressed to the end.