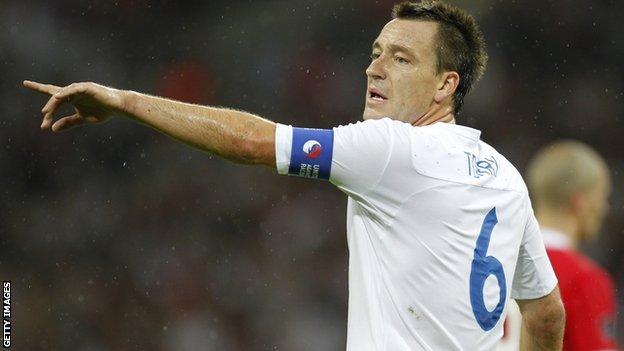 "I think the decision was inevitable and I'm very pleased and a bit relieved [FA chairman] David Bernstein has taken that decision," Triesman said.

"The only anxiety I have is it's taken rather too long to get to this point."

It's a tough job and not easy to think who would be ideal. I admired Rio Ferdinand in the role

The criminal charge against Chelsea skipper Terry was announced on 21 December.

He was stripped of the captaincy on 3 February, 48 hours after it was revealed his trial would be held on 9 July, eight days after the Euro 2012 final.

"The truth is a serious allegation [that is] not proved yet. In most organisations it would mean you simply could not go on as you were for this length of time," Triesman told Sportsweek on BBC Radio 5 live.

"I sometimes think football is in a bit of a bubble and the things that happen in the rest of the world don't apply to football. Well, I'm afraid they do.

"If someone is charged with what is a significant criminal offence, I think that is probably the moment that almost every organisation would act.

"I suspect most people when faced with this kind of difficulty do conclude they should stand down and clear their name. That is a significant preoccupation."

Chelsea manager Andre Villas-Boas had suggested Terry, 31, should have kept the captaincy, but Triesman argued there were wider issues.

Triesman added: "One thing that is clear about John Terry is he's a fine footballer and he's obviously, in most senses, able to get on with his job.

"But in a more general sense, most people would say clearing my name is the most important obligation.

"Although there has not been a hearing and not been a verdict, the FA itself has to look after the interests of football more widely.

"We've got to the point where there is not just potential disruption in the dressing room, but a significant charge that is going to be heard in court.

"Fabio [Capello, England manager] knows the dressing room and knows if it will be creating tension. The distinguishing thing about John Terry's position is that he's England captain.

"With that honour comes a very large responsibility and so, in these circumstances, the one thing the FA couldn't have continued with was John Terry as captain."

Manchester United's Rio Ferdinand, Anton's elder brother, has spoken for the first time about the effect on the family.

In an interview on BBC's Football Focus, Rio said: "Anton is my little brother. We have grown up together and I looked after him when we were kids.

"If something is going to affect him and hurt him, I am always there as a shoulder to lean on. In moments like this, when things are so public and you can't really say anything, it can be frustrating.

With Terry stripped of the captaincy for a second time, the prospect of him ever regaining it will surely be gone forever

"For my family, yes, it has been tough. My brother is not the accused."

Triesman suggested Rio's type of leadership was needed by England but the Manchester United player has ruled himself out of the running for the vacant position for a second stint in the job.

"It's a tough job and not easy to think who would be ideal," Triesman said.

"Rio is a very, very tough competitor and gets very worked up during games. What I noticed, with the mantle of responsibility of captaincy, he would calm other players down, he would get them away from the referee, he himself would be very careful about how the referee was handled. I thought he showed outstanding leadership.

"There are very likely other players who can do that as well. I'm trying to single out the qualities I observed.

"They have got to be a very fine player, a leader on the field, a leader in the dressing room, and probably make sure the rest of their life doesn't get in the way of those leadership functions."

Meanwhile the Attorney General's office is aware of a series of tweets that Queens Park Rangers football Joey Barton posted regarding the on-going Terry court case.

A spokesman for the Attorney General's office said: "I can confirm the tweets have been brought to our attention and have been viewed."