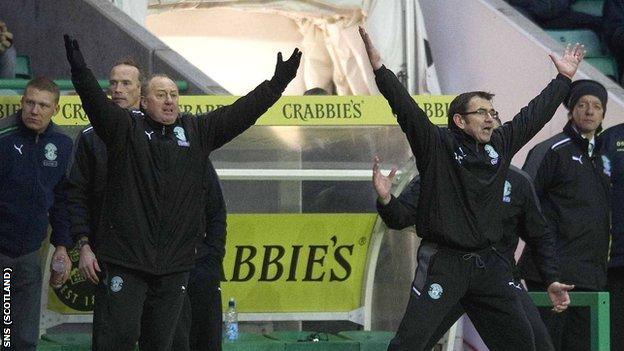 Hibs boss Pat Fenlon praised his side for their narrow victory 1-0 against Kilmarnock that sent them through to the quarter-finals of the Scottish Cup.

"We could have nicked a goal or two at the end. It was a decent cup tie and we are delighted to be through

A single strike from Eoin Doyle after 15 minutes was the difference between the two sides in a tough contest at Easter Road.

"I thought we defended really well as a team," said Fenlon.

"We could have nicked a goal or two at the end. It was a decent cup tie and we are delighted to be through."

Hibs kept up the pressure early on in the match and took a deserved lead when Doyle turned the ball into the left-hand corner.

Fenlon lauded a stoic display from his back four, which proved most pleasing as the often-maligned defence remained firm in the face of Kilmarnock's possession and probing.

"They've done well," added Fenlon. "I am delighted with them all.

"They're a good team and they caused us problems but our work-rate and our defensive shape was fantastic.

"We had a three v two and a four v two. We broke away and the final ball in behind wasn't what it should have been.

"We should have killed the game off and made it easier for everybody towards the end.

"We had to defend really deep. The two centre-halves got their heads on everything and we picked up the second balls off the headers as well.

"I am delighted for the players. They have worked really hard and they deserve a bit of credit for that."