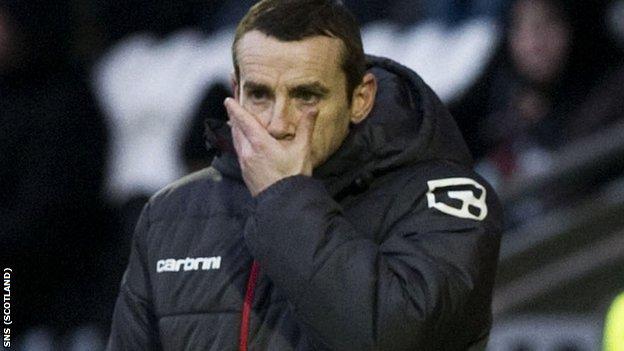 St Mirren manager Danny Lennon believes his players are fortunate to still be in the Scottish Cup after their 1-1 draw with Ross County.

The visitors missed an injury-time penalty which could have taken them through, and Lennon said it was a bad afternoon for the Buddies.

"It's not the first time we've struggled against First Division opposition," said Lennon.

"But we're still in the tie and that's the most important thing for us."

Richard Brittain put County in front from the spot five minutes from the break after Stuart Kettlewell was felled by keeper Craig Samson, then Steven Thompson quickly responded for the Scottish Premier League team by heading home a swift equaliser.

I'm disappointed for the supporters who have invested their hard-earned cash, and emotionally, and they didn't see the true identity of their team today

In the dying minutes of the match, Marc Corcoran was brought down by Marc McAusland inside the St Mirren penalty area, but Brittain missed the resulting penalty - much to the relief of the home support.

"I'm very disappointed in the level of performance," said Lennon. "That certainly wasn't us.

"There's a lot of habits have come in there, and I don't know where they've come from. I hope I don't see them again any time soon.

"We had one bit of brilliance throughout the game and we created a goal from it. It was disappointing that we didn't do it more.

"Graham Cary gave us a bit of a flurry in the last 10 minutes, but overall it was a disappointing day.

"I'm disappointed for the supporters who have invested their hard-earned cash, and emotionally, and they didn't see the true identity of their team today."

Lennon also said he would like to review the decision that led to Ross County's late penalty, but was keen not to try to pass the blame to anyone else for his side's poor showing.

"Over the full 90 minutes, I didn't think any team deserved to win the game," said Lennon. "It was pretty even, but Ross County will have felt hard done by with a golden opportunity at the end, which I would like to see again.

"I'm not going to blame the performance on the referee - we made a rod for our own back and we made it very difficult.

"It's up to us to come in on Monday morning and put things right."