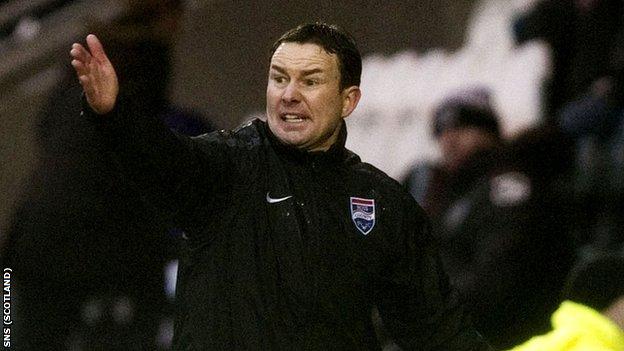 Ross County manager Derek Adams said while he was unhappy that his side drew 1-1 with St Mirren in the Scottish Cup, the performance warranted a replay.

County captain Richard Brittain missed a penalty in the dying minutes of the match after netting from the spot in the 40th minute.

"It's disappointing, because it was the last kick of the ball and if you score, it's all over," said Adams.

"But the application and desire to win the match was there to see."

Brittain put County in front from the spot five minutes from the break after Stuart Kettlewell was felled by keeper Craig Samson.

We're delighted with the way we played and the performance, but unfortunately we have to go to a replay

Both sides had chances to finish off the match, but Brittain failed to convert the late penalty and the match now goes to a replay in Dingwall.

"We're delighted with the way we played and the performance, but unfortunately we have to go to a replay," said Adams.

"I thought it was still a good cup tie. It was end-to-end at times and it was competitive.

"Both teams wanted to win the match, which was important.

"I certainly didn't want a replay - we have a lot of games to be played - but performance-wise, it was excellent."

Despite Brittain's miss, Adams remained optimistic that his side can make life difficult for St Mirren in the replay at home, given their good record there all season.

"Richard has been great for us," said Adams. "He scored a good penalty in the first half and in the second half, with the last kick of the ball, we had an opportunity to go into the quarter-finals.

"But, it goes to another day, and we'll see how it goes next time.

"We have a good record at home, we've done very well in cup competitions and I think we'll do well against St Mirren, so we're looking forward to it."