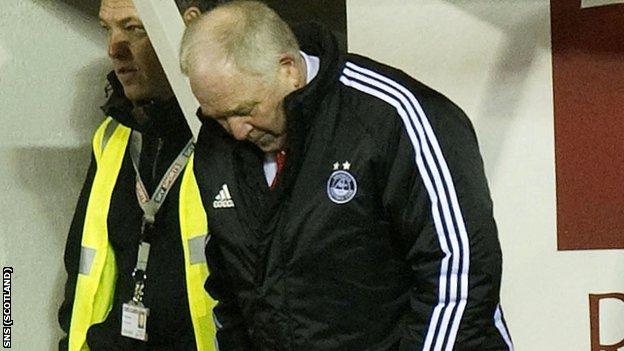 Aberdeen manager Craig Brown was critical of his side's performance after their 1-1 draw with Queen of the South in Scottish Cup.

Scott McLaughlin broke the deadlock for the Doonhamers, but Scott Vernon spared Aberdeen's blushes with a close-range equaliser to earn a replay.

"I'm very disappointed but I have to acknowledge the excellent effort of the visiting team," said Brown.

"All the credit goes to Queen of the South and very little to my own team."

The Dons had the upper hand in the match, especially in the second half, yet found themselves trailing when McLaughlin stroked home.

Rory McArdle smashed a header off the bar before Vernon prodded the equaliser from Kari Arnason's throw-in and Brown was full of praise for the visitors, but remained critical of his own side.

"Gus had a gameplan which his players carried out to perfection," said Brown.

"I'm not critical of that as I think the way Queen of the South played was the way to play this match.

"They came here to try to get a goal on the break, which they did. All credit goes to the visiting team and I take responsibility for a disappointing performance."

However, Brown is hopeful that his side will make amends when the sides meet again a week on Tuesday.

"It will be difficult down in Dumfries but in front of their own fans they will have to come out and play more adventurous football," added Brown.

"I don't think the home fans would be too pleased if they were to camp in but that will be Gus's decision. His decision today was totally vindicated with the result they got and they very nearly got a victory.

"Teams from a lower division can raise their game to compete in the cup and we have seen cup upsets so very often.

"Many people will tell us it has happened too often to Aberdeen and it nearly happened today.

"We are still in the cup and that is the one plus from today and hopefully we are able to do a bit better in the replay."