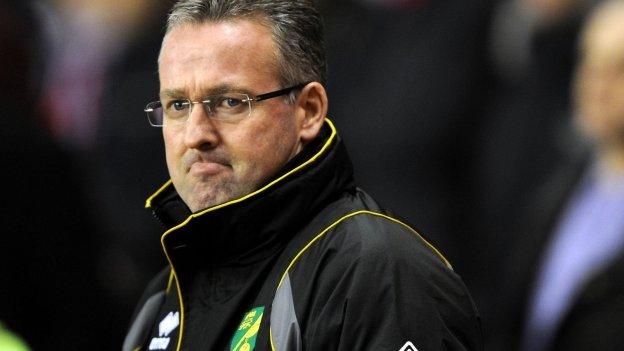 Norwich City manager Paul Lambert rates his side's 2-0 win over Bolton as their best since he took over at Carrow Road.

The Canaries recovered from first-half injuries which forced off centre-backs Daniel Ayala and Zak Whitbread to secure a win that takes them to ninth.

"In my time, which is nearly three seasons now, that's as good as it's been because of the circumstances and the desire they showed," said Lambert.

"We deserved to win the game. I thought we were dominant."

After Ayala and Whitbread had limped off before the break, full-back Kyle Naughton deputised in the middle of defence.

And, despite Bolton introducing substitute Kevin Davies to play alongside lone striker David Ngog in the latter stages, the Canaries ended comfortable winners.

"It's a blow when you lose your two centre-backs," added Lambert.

"I can't remember that happening to me before.

"The two lads who went off are big, big players and Bolton are a big side. And Kyle Naughton is knee-high to a grasshopper.

"But it showed the desire of the lads not to get beaten."

Lambert, a European Cup winner as a player with Borussia Dortmund, took charge of Norwich after they had made a poor start to their League One campaign in August 2009.

He led them to successive promotions to return them to the top flight for the first time since 2005.

They are now 12 points clear of the relegation zone, above QPR and Swansea who were promoted alongside them last season.