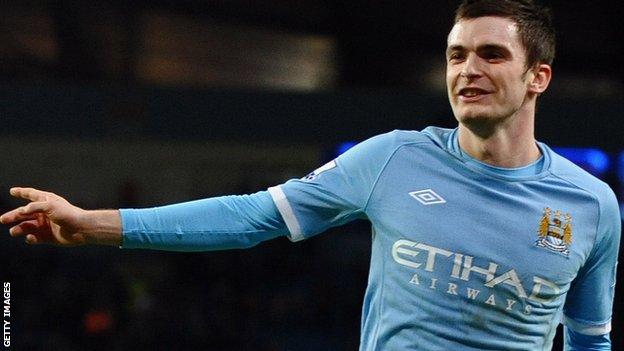 Johnson won the penalty from which City opened the scoring before his cross was turned into his own net by defender Chris Baird in a 3-0 victory.

"He took his chance very well," said Mancini. "He can become even better, but he worked and had a very good game.

"Sometimes he thinks, 'OK, in this game I scored one goal, I did an assist, that is enough'," said Mancini after that win at Molineux.

Johnson's appearance in the starting XI against Fulham was only his third league start since, although he has appeared eight times as a substitute in the meantime.

But Mancini was happy with the hunger that Johnson had shown on his latest chance to impress.

"I am pleased for Adam today because he took his chance very well," he added.

"We all know what a fantastic player he is."

Johnson won City an early penalty when he went down under a challenge from Baird, a decision described by Fulham manager Martin Jol as "soft."

"I was surprised at the penalty but, if you look at it again, maybe Johnson did well," said Jol.

"I had a few players in the past who did that. We all tried it when we were younger.

"The referee has to make a decision but I still think it was a soft one."

The victory opens up a three-point lead at the top of the Premier League table for City, with closest challengers and local rivals Manchester United playing at Chelsea on Sunday.

United have not won at Stamford Bridge since 2002, but Mancini insisted that the defending champions have too much experience of title races to feel any additional pressure.

"I don't think this puts pressure on United," he reflected. "They are used to always being there.

"But they are like us. We know, if we want to win this league, we should just try and win all the games and not think about other teams."