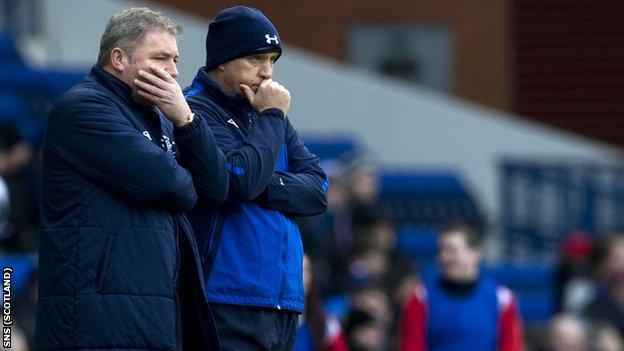 Rangers manager Ally McCoist admitted he is still trying to bring in players following the Scottish Cup exit at the hands of Dundee United.

McCoist was unable to sign a replacement before the January transfer window closed.

"I haven't gone as far as the finances but I know two or three that would be appealing to us," said McCoist.

"I think if I went to [chairman] Craig [Whyte] with a player that we could maybe bring in he would certainly have a look at it. We've got two or three targets.

"But I will not bring anybody in who I don't think can go into the team or better the squad. I don't think there is any point in that at all."

The Ibrox side struggled to penetrate a well-organised United defence and first-half goals by Gavin Gunning and Johnny Russell sent Rangers tumbling out of the Scottish Cup.

Though the transfer window is now closed, McCoist would be able to sign players who are out of contract.

"We have injury problems in that department [up front]," said McCoist. "Kyle Lafferty and Steven Naismith can both play there.

"We're going with two not really recognised strikers for the last 15 or 20 minutes but that's where we are.

"I don't have any complaints about how the two lads went about it, I just felt we lacked a bit of quality to open up United and that was a disappointing thing."

Rangers are awaiting the outcome of a long-running tax case, which could place the future of the club in doubt.

And McCoist insists any onfield problems are dwarfed by the potential tax liability.

"I think the crisis point comes with the tax case more than anything," said the manager, who has seen his side knocked out of both domestic cup competitions.

"That's the biggest problem that the club faces. I don't think there is any doubt about that.

"What we all need is clarification on what's happening so that we can move forward. The uncertainty regarding this tax issue is the biggest problem that we have.

"You could use the word 'crisis' in terms of the tax case, but we need to know one way or another where it stands and what we face so we can deal with it and move forward."

"We have been trying to re-sign Lafferty and offer him a new deal," said McCoist.

"That's my views on it and that's crystal clear. I know nothing about trying to sell Lafferty and I certainly don't know of any bids that came in. I told the player that this morning as well."

Asked if there may have been moves to sell Lafferty without the manager's knowledge, McCoist added: "I wouldn't have thought so, no."