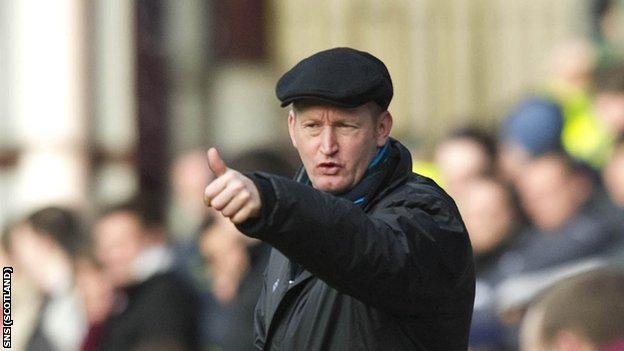 Trailing 1-0 at the break, Lomas's men battled back to 1-1 through Cillian Sheridan's goal, which came after Dave MacKay had been sent off for Saints.

"Work ethic and team spirit are great traits to have," said Lomas.

"We've got them in abundance, as well as some very good players. My boys yet again put on a high class performance."

Sheridan made his impact as a second-half substitute and St Johnstone will host Hearts in the replay at McDiarmid Park on 14 February.

"We had a little change and Cilli gave us something up front; a bit of pace, bit of presence and we thrived off it.

"He's a good player, I keep telling him. He's strong, he's quick, he can score.

"He has every attribute in the locker to be a top, top player and it's just wanting him to believe that he can be and the work that you've got to put in day in, day out to achieve them goals.

"It just doesn't happen for you, you've got to work hard and I thought he was brilliant."

Of the red card, Lomas confessed he was "mystified" that MacKay's high boot challenge on David Templeton had been punished with a second yellow card.

"I'm not going to get myself into any trouble but I would like [referee] Craig Thomson to explain it," added Lomas.

"Dave's running back, he can't see what's behind him, he's just hooking that ball back where it came from and unfortunately the lad's come through with his head.

"I can't see how he can send him off for that. How can he say it's dangerous play when he can't even see the man?"