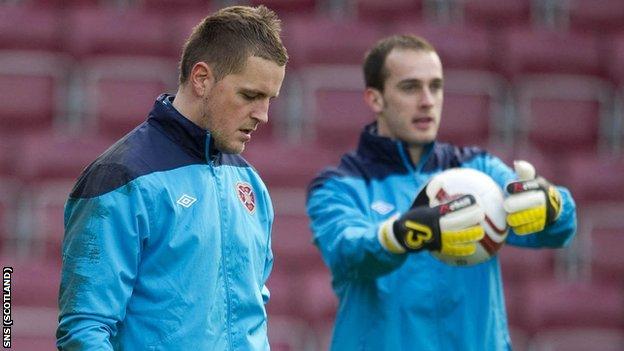 Jamie MacDonald started in goal for the Tynecastle side as they went on to draw the Scottish Cup tie, meaning a replay on 14 February.

Kello, out of contract this summer, is understood to have turned down a move to Rapid Vienna earlier this week.

"It's a tough situation. It's not a good thing for us," said Sergio.

"There is an issue running between him and our board, a political thing. It's not up to me to explain that.

"I was told that because Marian is not committed with the future with Hearts, we should play the others."

David Templeton's opener for Hearts was cancelled out by Cillian Sheridan's strike for Saints.

"Generally I'm not pleased with the performance" said Sergio.

"Maybe St Johnstone deserved the second game. We'll get ready to go there and try to win."

Sergio would have preferred to have played the match on Saturday but Scotland's Six Nations rugby match with England at Murrayfield meant a Sunday fixture for Hearts.

"It was better for us if we played yesterday, one more day to recover the team," added Sergio.

"Yesterday I was very surprised that there was a game at Easter Road [between Hibernian and Kilmarnock].

"We were told because of the rugby game we couldn't play on Saturday. I wanted to play yesterday, or even Friday.