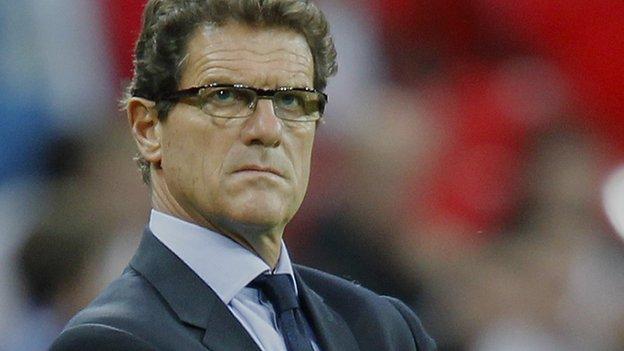 Terry, 31, was removed as captain pending his trial in July over alleged racial abuse of QPR's Anton Ferdinand.

"I thought it was right that Terry should keep the captain's armband," said the 65-year-old Italian.

"I have spoken to the [FA] chairman and I have said that in my opinion one cannot be punished until it is official and the court - a non-sport court, a civil court - had made a decision to decide if John Terry has done what he is accused of."

Capello indicated that he did not believe someone should be punished by sporting authorities before a court had reached a verdict.

Terry, who first lost the England captaincy in February 2010 following allegations about his private life, has entered a plea of not guilty to the charge.

Capello is free to select the Chelsea defender for the Netherlands friendly in February and the European Championship in the summer.

The FA declined to comment on Capello's remarks, but former chief executive David Davies said that they would not be a surprise to his bosses.

"My understanding is that when it was discussed with Fabio Capello, who last week was in Italy, he made it clear to the chairman of the FA that was his view," Davies told the BBC.

"Having said that, the reality is that the board of the FA had taken the decision that they had and life has gone on.

"He clearly wants to support John Terry, a guy who Fabio appointed twice to this very special job.

Capello, who became England coach in December 2007, is reportedly due at Wembley on Monday to speak to Bernstein.

The former Italy midfielder, who earns a £6m a year, is due to stand down when his contract runs out after Euro 2012.

"He is a proud man and he did not like having his authority undermined.

"I think he will be talking to the Football Association in the days to come to try to thrash out some way forward together. If that does not happen already some talk of him joining Franco Baldini at Roma and there is further talk of Inter Milan."

Meanwhile, Capello must decide who takes over from Terry as captain, Anton's brother Rio Ferdinand having said that he does not want the role.

Central defender Rio was briefly captain after Terry first lost the armband two years ago, but Capello turned back to the Chelsea captain in March 2011.

Italian football journalist Gabrielle Marcotti says there is confusion over the FA's position.

"This thing where you can play for your country but can't wear the captain's armband comes across as a bit of a fudge," he told the BBC.

Meanwhile, Manchester City goalkeeper Joe Hart, 24, is flattered to be linked with the captaincy, but feels there are more obvious candidates.

"There are a lot stronger candidates than me," he said. "I don't have a view on who should be captain. As long as I'm playing, I don't care."