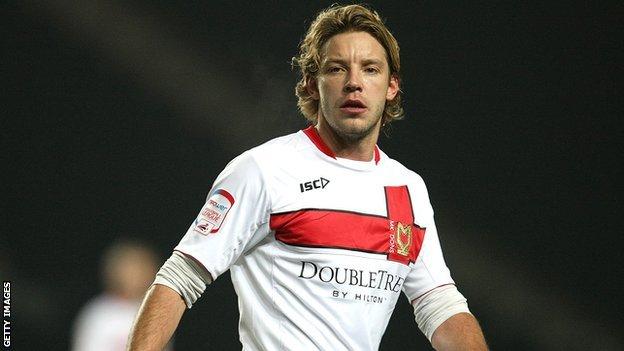 MK Dons boss Karl Robinson has revealed that he had not intended to play injury-plagued loan signing Alan Smith for a month.

The Newcastle forward, 31, made his first start on Saturday in the 1-1 draw with Huddersfield after making his debut against Sheffield Wednesday.

"But he knocked on my door on Monday and said he wanted to play."

Robinson is looking forward to seeing more of the former England international, who had not started a game in a year following an ankle injury suffered playing for Newcastle against Sunderland.

"He showed how good he is. He won his tackles and won his headers. He gave the ball away once or twice and looked a little laboured at times but he'll get there."

The Dons' equaliser on Saturday came from Stephen Gleeson's whipped in free-kick from 35 yards, a tactic which Robinson says they have worked on.

"He never meant it. The aim is when you work in training on an inswinger is that if everyone misses it, it hopefully goes in the back post," Robinson said.

"It you're going to do it, make sure it ends up inside the goal and if no-one gets anything on it, it'll drop into the net."