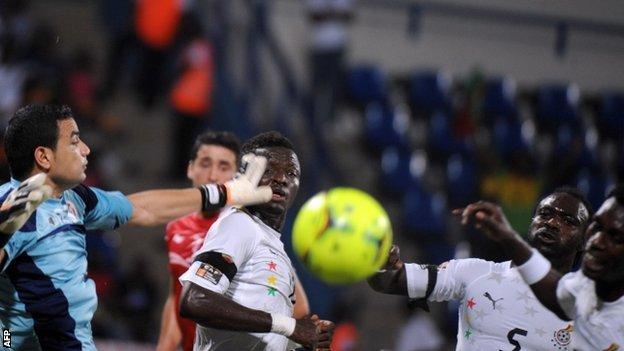 Ghana have admitted they are lucky to have reached the Africa Cup of Nations semi-finals, after being gifted a quarter-final winner by Tunisia.

The teams were level in extra-time on Sunday when Tunisia keeper Aymen Mathlouthi spilled a cross for Andre 'Dede' Ayew to tap home.

"I think we were lucky there," Ghana striker Asamoah Gyan said afterwards.

"You know in football anything can happen, luck also counts and you see the error the keeper made."

"I wouldn't blame him, but it happens."

It was my fault on every level

Gyan's admission comes after he also acknowledged luck played its part in the opening win against Botswana, in a finals which has seen the second favourites win three and draw once, without hitting top form.

Mathlouthi, meanwhile, has accepted full responsibility for Tunisia's exit, after his error decided the game with his team on the ascendancy in added time.

"It's a pity it ended like this for us," said Mathlouthi, who has otherwise been a consistent performer for his side in their past three Nations Cup appearances.

"It was my fault on every level."

Mathlouthi's opposite number, Adam Kwarasey, who has had his own moments of uncertainty in goal during the tournament, offered his sympathy to the Tunisian keeper.

"It's always sad to see colleagues [make] mistakes like that," the Ghanaian goalkeeper told BBC Sport.

"I feel sorry for him because the goal decided the game.

"But football is a game of mistakes."

No one knew that Zambia would go far and they play very good football. They are not just lucky.

Kwarasey also acknowledged Ghana were far from at their best, before being handed the winner.

Tunisian defender Anis Boussaidi said his side did not deserve to lose, for the seventh time against the Ghanaians at the Nations Cup, but that there was no way back after Mathouthi's error.

"We didn't deserve to lose. Even with 10 players [after defender Aymen Abdennour's sending off in extra-time] we were on the attack," he said.

"Just when we started to believe that we could win the game and we had the game in our hands, we made the mistake and we paid [the price]."

Ghana take on Zambia in Wednesday's first semi-final in Bata, and Black Stars midfielder Sulley Muntari says his side have a tough task against a Chipolopolo side who have earned their place in the quarter-finals.

"It's going to be a very difficult game," Muntari said.

"No one knew that Zambia would go far and they play very good football - they are not just lucky."

Ghana and Zambia's meeting in Bata is followed by Mali and Ivory Coast's clash in the second last-four tie, in Libreville, later on Wednesday.