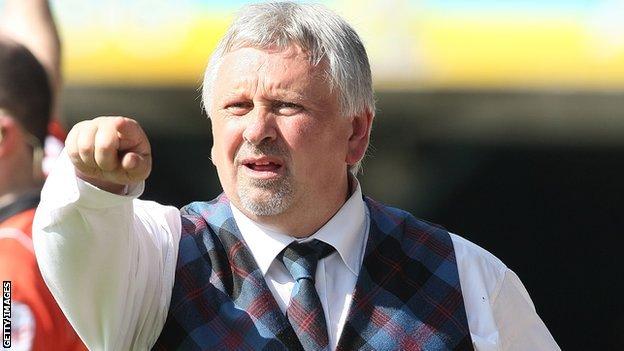 Southend United boss Paul Sturrock was unhappy with his team for trying to play football as they threw away a 2-0 lead to draw with lowly Plymouth.

Sturrock told BBC Essex: "In the first half we were so dominant. We were in their faces and the right positions.

"We decided that 2-0 is what it's about and you can't do that. We decided we were a football team and played it square and back. We've paid the price."

Michael Timlin gave the Shrimpers the lead in the first minute and David Martin made it 2-0 at half-time, only for Nick Chadwick and Alex MacDonald to score late on and rescue a point for relegation-battling Plymouth.

Sturrock said: "It could have been more at half-time but in the second we've come out with wrong attitude, that we were going onto bigger and better things and we've paid the penalty.

"That is two points dropped. You can't dictate a game like we did and then come away with a point. Why all of a sudden, did we become footballers?"

Winger Martin said: "They wanted it more than us in the second half. We were inconsistent and in the last 10 minutes we didn't defend our lines and they nicked it.

"We set the tone and looked totally on top. In the second half, even though they had chances, it never looked beyond us. But it's completely changed in 10 minutes.

"It was good to get a goal - it's a massive confidence boost. It would have been nice to top it up with three points but it wasn't that day."