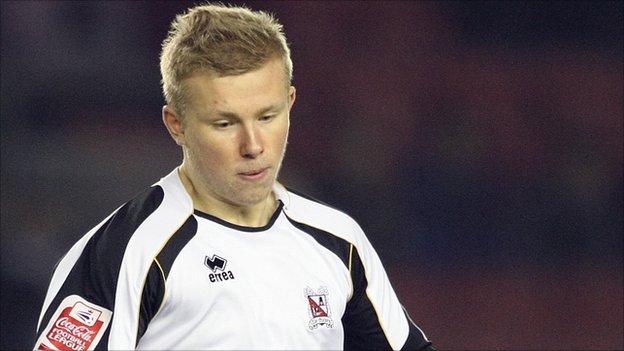 Middlesbrough manager Tony Mowbray has said Curtis Main will be given an opportunity in the Championship amid injuries to two senior strikers.

Scott McDonald is likely to be out for up to eight weeks, while Marvin Emnes hobbled off in Saturday's 0-0 draw with Crystal Palace to hand Main his debut.

"I've said to him it'll be tougher, defenders will be stronger, faster and cleverer," Mowbray told BBC Tees.

"Sometimes you throw people into the sea to see if they sink or swim."

"The time has come for Curtis, who is scoring goals freely for the development team to get on the pitch.

"He's going to have a part to play over the next few weeks for sure."

The 19-year-old striker joined Middlesbrough from north east neighbours Darlington in the summer, leaving the Quakers with five goals in 66 games.

"Obviously the squad has taken a few injuries over the last couple of weeks," Main said.

"It has come earlier than planned, but I have been working hard and I feel ready when needed.

"I'm looking forward to it, I want to do well for the team."

Main came on to partner recent signing Lukas Jutkiewicz on his Riverside bow, and has already caught the eye of the Teessiders' coaching staff with his presence.

"He's learning and developing his game, how to play and where to play and the technical side of the game.

"We're hopeful he has got a bright future."