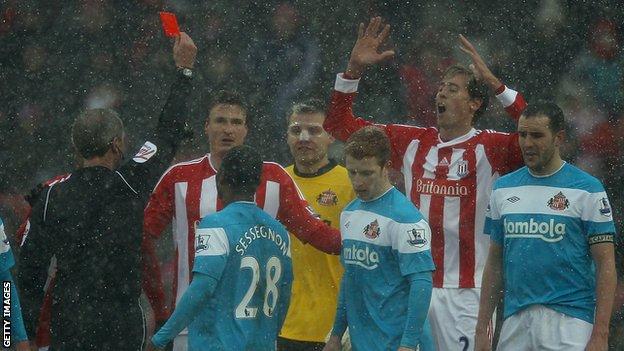 Stoke City have lost their appeal to the Football Association over Robert Huth's red card against Sunderland.

The defender will serve a three-match ban for his instant dismissal for a tackle on Sunderland's David Meyler in Saturday's 1-0 Premier League defeat.

Stoke used photographic and video evidence to try and acquit Huth after boss Tony Pulis claimed there was "no intent" in the German's challenge.

Robert slides in but actually doesn't touch the player

But an independent regulatory commission has rejected the appeal.

It did not decide to extend Huth's punishment by another game, which it could have done if the appeal was deemed to be frivolous.

The 27-year-old will miss Premier League matches against Fulham and Swansea, as well as the FA Cup fifth-round tie at League Two side Crawley Town.

"I think it's a disease that's coming into the game where players roll around and they're looking to see if they can get people booked or sent off.

"Then you get situations when players are falling around and rolling around when they have not even been touched.

"Really and truthfully the player is trying to get the player sent off."