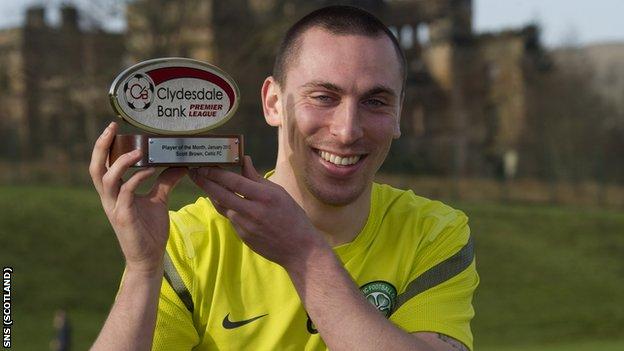 Celtic manager Neil Lennon says the Clydesdale Bank player of the month for January, Scott Brown, has more to offer than he did during his time as captain.

Brown, who has scored in each of his last three matches, returned to form after a spell out injured and Lennon believes has matured in the role.

"He's got more attributes than I had in terms of his running power and his eye for a goal," said Lennon.

"I'm very pleased with the way he has progressed."

Brown, 26, has found a vein of form that has helped Celtic remain in contention for a domestic clean sweep, winning their last 14 league matches.

The Glasgow club currently lead the Scottish Premier League, are in the League Cup final and progressed to the last eight of the Scottish Cup at the weekend - and Lennon believes a lot of the club's success is down to Brown's leadership.

"I'm delighted for him, I think he deserves it," said Lennon of the monthly award.

"I think he's playing with great authority no the pitch - he's an excellent captain - he has the respect of the players in the dressing room which is important to be a captain at a big club.

"He's matured. Getting over the injury with the ankle, I thought we would get him back to his best - and now we're seeing that.

"People talk about him being a good athlete - he reads the game very well. His football appreciation is good and he's a better footballer than a lot of people give him credit for.

"He's grown into the role and galvanaised the team since he's come back into the squad fit and healthy."

Brown was pleased to receive the award, but insisted it was largely down to a wider effort on the part of his team-mates.

"It's great to get, but it's a team performance as well," explained Brown.

"There's always room for improvement. I've never scored three in three before, so there's a first for everything."