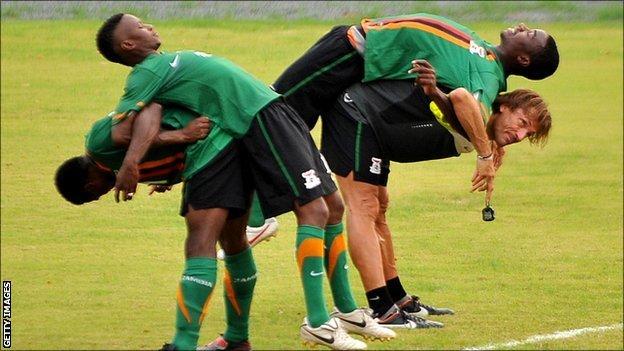 Zambia coach Herve Renard believes his side will hold a crucial advantage going into Wednesday's Africa Cup of Nations semi-final against Ghana.

The Zambians have been in Bata since last Tuesday and beat Sudan in Saturday's quarter-final there.

Meanwhile, the Black Stars were taken to extra-time in Franceville on Sunday - and only arrived in Bata on Monday.

"In terms of regeneration it is good for us, as we have three days (of rest) before this semi-final," said Renard.

Zambia beat the Sudanese 3-0 in regulation time, whereas Ghana needed extra-time to win their tense quarter-final against the Carthage Eagles in Gabon.

So while the West Africans were flying from eastern Gabon through to Bata, the Zambian squad was busy preparing for Wednesday's game.

"We got rest on Sunday, while we trained (on Monday)," Renard told BBC Sport.

The teams kick off Wednesday's semi-finals in the Equatoguinean city Bata - for the right to play the final against either Ivory Coast or Mali, who clash in Libreville later that same day.

With the Black Stars widely-fancied before the tournament, Renard - who worked as assistant coach for Ghana at the 2008 Nations Cup - says that his side have nothing to lose ahead of their semi-final clash.

"We don't have any pressure - we want to beat Ghana to get to the final," said Renard.