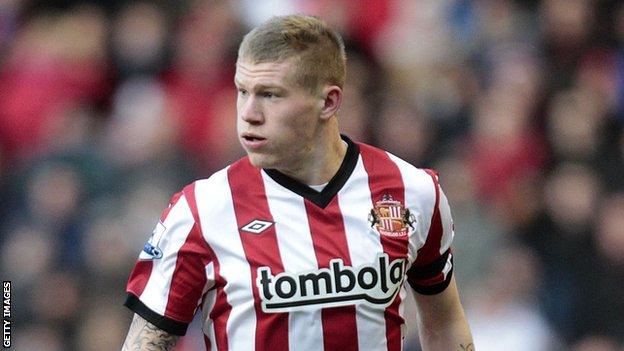 Sunderland boss Martin O'Neill has said the form of winger James McClean will have given Republic of Ireland coach Giovanni Trapattoni "food for thought".

McClean will have to wait until Friday to find out if he is in the squad to face the Czech Republic in a friendly match at the end of the month.

"I'm not so sure you could ignore the talents, he's done fantastically," O'Neill told BBC Newcastle.

"I'm quite sure he at least is giving food for thought to the Ireland camp."

O'Neill added: "Hopefully it's not a flash in the pan. He's played a consecutive number of games at a high level, done magnificently and that itself warrants some thought."

Three goals in his first 11 Premier League and FA Cup games have propelled the former Derry City winger, who switched from Northern Ireland to the Republic last year, into the spotlight.

However, with Spartak Moscow's Aiden McGeady, Fulham's Damien Duff and Stephen Hunt at Wolves all regular fixtures in the Ireland squad, there is plenty of competition in wide areas.

"I would have thought he would have given cause for contemplation," O'Neill said of the 22-year-old.

"I can understand he [Trapattoni] has worked with those players for the last couple of years and done fantastically to get them into qualification.

"There is a sense that those players who have done it for him would be first on the list."

James McClean has only missed two of Martin O'Neill's 13 games in charge, having not featured before December.

Middlesbrough manager Tony Mowbray will be forced to draft in a host of youngsters for the FA Cup fourth round replay at the Riverside Stadium due to a series of injury problems.

He claims that McClean should offer an inspiration to the fringe players that are involved.

Mowbray said: "The team we are playing will have a classic example. I don't know the history of it, other than Steve Bruce will have brought the boy in from Ireland, and he didn't really surface until Martin came.

"Some young boys at our football club have been playing development games and not been around the team but if they get an opportunity, who's to say they don't grab it with both hands, score the winner and push themselves in for next weekend and off they go?"