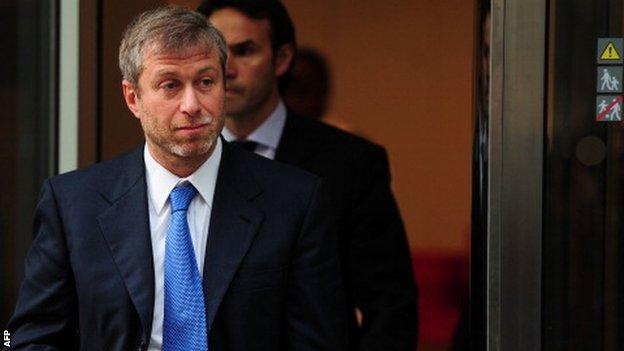 Chelsea owner Roman Abramovich watched his club's players train on Tuesday for the second time in a week.

The Russian billionaire is usually absent from the Blues' Cobham base.

He is believed to have made his first trip of the season last week in the build-up to Sunday's 3-3 Premier League draw with Manchester United.

Manager Andre Villas-Boas played down the significance of the latest visit: "Roman is always very interested in the running of events."

Abramovich - who is reported to have lavished £1bn of his own fortune since he purchased the club in 2003 - first spent 30 minutes watching Villas-Boas put his players through their paces in the build-up to their clash with United on Saturday. He then chatted to the Portuguese for a further 20 minutes.

On Tuesday, he is believed to have spent half an hour speaking to Villas-Boas's squad.

Chelsea have insisted there was nothing unusual in the timing of the trip just days after the disappointing stalemate.

Despite Abramovich's reputation for sacking managers - five have been dispensed with during his reign - Villas-Boas insisted the pair also discussed plans for next season.

He said: "We touched a little bit, of course, on next year's project, but mainly on that [United] game.

"Roman is a very educated person to the cause of Chelsea football club and his aura is always present."