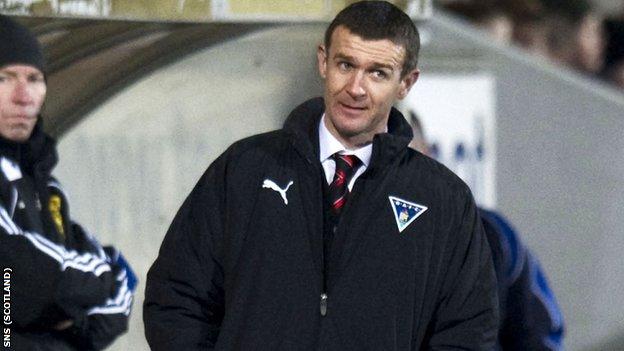 Dunfermline manager Jim McIntyre felt his side deserved at least a point following their 1-1 league draw at home to Kilmarnock.

Keeper Chris Smith pulled off a string of unlikely saves to keep the Pars in the match after Andy Kirk cancelled out James Fowler's opener.

"On the balance of play, a point is probably a fair result," said McIntyre.

"Chris was fantastic - top drawer - and I thought on a couple of occasions, he was exceptional."

The Pars were one goal down after 21 minutes when Fowler's deflected shot found the net, but Kirk levelled with just a minute of the first-half remaining.

Despite being put under pressure for the remainder of the match, McIntyre was pleased with his side's performance and sang the praises of Smith, who performed well in difficult conditions.

We can certanily play better, but their spirit and tenacity was fantastic - and I was delighted with that

"It was a tricky surface and there were a few bobbling testers for him and a couple that bobbled right up in the air," said McIntyre. "It wasn't easy for him.

The draw means Dunfermline remain rooted to the bottom of the Scottish Premier League table, having failed to win a home match all season, but McIntyre remains confident that his players can build on the performance against Kilmarnock and continue to improve.

He added: "I think in general, we're a lot better in possession of the ball than we've shown tonight. We gave away a few slack passes, which I've not seen us do as many times as we did tonight.

"We can certainly play better, but their spirit and tenacity was fantastic - and I was delighted with that."