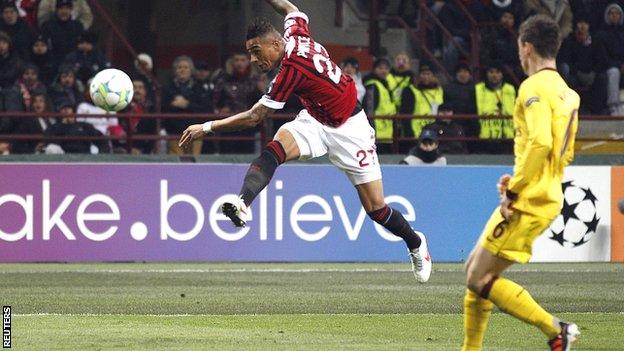 Arsenal's Champions League quarter-final hopes are in tatters after they were comprehensively beaten by AC Milan in the first leg of the last 16.

The Gunners were second best from the moment Kevin-Prince Boateng's superb strike gave Milan the lead.

Ex-Manchester City forward Robinho headed a second and drove in a third to put the home side firmly in control.

Zlatan Ibrahimovic's penalty, after he was fouled, consigned Arsenal to their heaviest European defeat.

Four years ago, Arsenal became the first English side to beat AC Milan at the San Siro courtesy of a 2-0 second-leg victory that eliminated the then holders from the last 16 of the Champions League.

It was a virtuoso performance of defensive efficiency and ruthless counter-attacking football. It was cool, classy and confident. It was light years ahead of what they produced in Italy's second largest city on Wednesday.

Such is Arsenal's decline from those hopeful heights of 2008, and such is their mental fragility following the inconsistencies of this season, that even despite a relatively assured opening 15 minutes, the moment they fell behind they fell apart.

What followed was one-way traffic as defenders dithered and were dragged about with ease while possession-starved forwards looked on forlornly.

Star striker Robin van Persie has excelled for his side this season, but he was largely a passenger, barring one second-half volley saved by Christian Abbiati, as was half-time substitute Thierry Henry, whose final appearance in an Arsenal shirt will be one he will want to quickly forget.

In contrast, Milan, who despite their position at the top of Serie A have not entirely convinced this season, were as sprightly and ruthless as their opponents had been four years previous.

Boateng was an ever-willing and powerful presence in midfield, Robinho showed more in 90 minutes than he did in his entire second season at Manchester City, while Ibrahimovic seems to be saving his Champions League best just for the Gunners. The Swedish striker has scored three goals in European competition against English sides, all of them against Wenger's men.

It was Boateng who set Milan on their way with a superb opening goal. The Ghanaian chested down Antonio Nocerino's long ball forward before unleashing a first time shot that beat Wojciech Szczesny and found the net via the underside of the bar. That the midfielder is a former Tottenham Hotspur player added further misery for the travelling Arsenal fans.

With momentum behind them and their opponents rattled it was surprising that it took the home side so long to add to their lead.

However, just before half-time the inevitable second came, again courtesy of a former Premier League player as Robinho stooped to glance Ibrahimovic's cross into the far corner of the net.

Arsenal boss Arsene Wenger introduced Henry at the break, hoping to coax one last miracle from the Frenchman before he jetted back to New York, but before the forward could touch the ball, Milan had a third.

Ibrahimovic again fed Robinho, this time on the edge of the box, who was given time and space by a slip from the out-of-sorts Thomas Vermaelen to pick his spot in the bottom corner of Szczesny's net.

Having worked so hard for others it was fitting reward for Ibrahimovic that he scored the fourth, stepping up to slot home a penalty after going down in the area under a challenge from the clumsy Johan Djourou.

At full-time, Arsenal's dejected players trudged from the field. 2008 seems a long, long time ago.