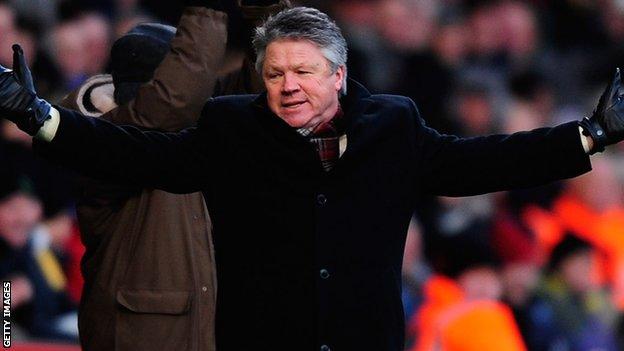 Exeter City director of football Steve Perryman says his side never looked like scoring a goal in their 2-0 defeat at Bournemouth.

The Grecians have now played 363 minutes of football without a goal and last found the net in their 2-0 win at Chesterfield on 7 January.

"We didn't quite look like we had it in us," Perryman told BBC Radio Devon.

"There were encouraging signs but it was one of those nights when we didn't look like we were going to score."

If we'd have have won here tonight 3-0 it's no good sitting back and saying 'well Saturday will be easy' because it won't.

But Perryman says Exeter, who are two points above the League One relegation zone and host second-placed Sheffield Wednesday on Saturday, must not let their heads drop.

"We've got to keep going, everyone's disappointed, but within your disappointment what can you do?

"You can't pack up, you can't give up, you have to go into the next game and keep going for it and keep working.

"If we'd have have won here tonight 3-0 it's no good sitting back and saying 'well Saturday will be easy' because it won't.

"You just keep trying to improve and working hard and you're just looking for a little something to turn your way."

Despite City lying outside the drop zone - three of the bottom four teams have games in hand on them.