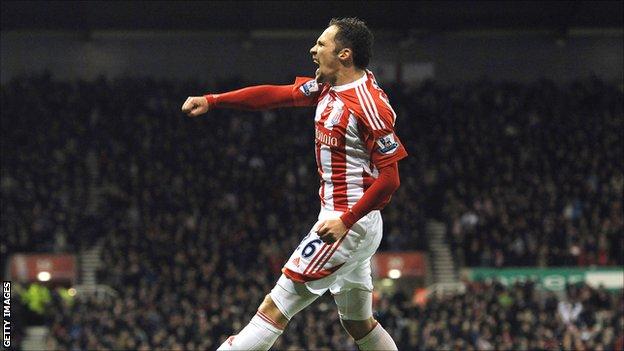 Stoke City winger Matthew Etherington is confident of finding his best form after admitting he has turned in some "indifferent" performances this season.

"I'll be the first to admit that my form hasn't been as good as the last two seasons," he told BBC Radio Stoke.

"Hopefully now, with some big games coming up, I can step up to the mark and put in some big displays."

The 30-year-old has started 27 games in all competitions for the Potters this season, with his only two goals of the campaign coming in the same game - a 2-1 win over Tottenham at the Britannia Stadium in December.

Etherington believes the position he plays may have made his dip in form more evident to supporters.

"It's frustrating as a winger sometimes," said the former West Ham wideman. "I know, first and foremost, that some of my performances haven't been good enough.

"It happens in every team, every winger gets it, that you don't get the ball as much as you want.

"Sometimes it's nothing to do with your team-mates or anyone around you. It's just to do with the way the game is going and you're a bit isolated out there sometimes."

Etherington, who has recovered from illness in time to be considered for the trip to Fulham on Saturday, has described February as a "pivotal month" for Stoke.

Tony Pulis's side are battling for a top-half finish in the Premier League and are still involved in two cup competitions.

The Potters are due to face League Two side Crawley in the fifth round of the FA Cup and also have an exciting Europa League tie against Spanish side Valencia to look forward to.

"We've got some big games coming up and it looks to be a pivotal month," added Etherington.

"Going into March, we could still be in the FA Cup and the Europa League, and hopefully we'll be pushing on in the league. We've got it all to play for."