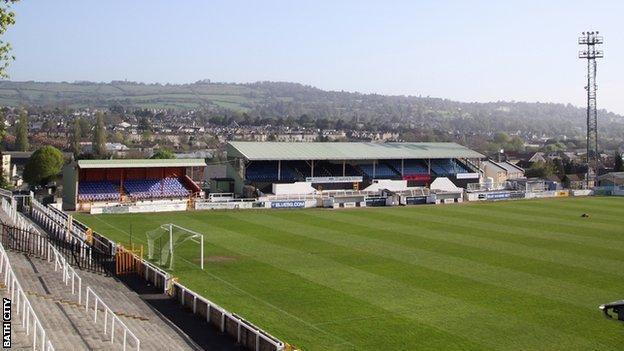 Blue Square Bet Premier club Bath City have offered the chance to rename their ground for £50.

The Romans are inviting people to make suggestions for a new name for Twerton Park with a draw being made at half-time of their home clash with Forest Green Rovers on 9 April.

The new title will be implemented for the 2012/13 season.

"The plan is that local businesses and fans can get involved," chairman Manda Rigby told BBC Radio Bristol.

"Like a lot of companies we are facing some financial pressure so it's about coming up with something innovative to try and alleviate that.

"What we don't want to do is impose anything. We want to get the fans involved as much as possible and we thought this would be a good way to do that."

AFC Bournemouth held a similar draw for the naming rights to their stadium in 2009 - with tickets priced at £500 - and Dean Court was renamed The Classic Eyes Stadium at Dean Court.

"We did it at fairly short notice because the club had had problems with administration," said Brian Benjafield, Bournemouth's commercial executive.

"We'd been unable to find a sponsor a couple of seasons ago and the chairman came up with the idea of running the draw.

"We more than covered what we would have been looking for in sponsorship money so it worked really well for us. We made around £50,000."

To avoid falling foul of the Gambling Act, which states that there must not be any commercial gain to the football club from the participants of the draw, the £50 will buy four match day tickets for the game against Forest Green and, as part of the package, the buyer will be invited to enter a name for the stadium into the draw.