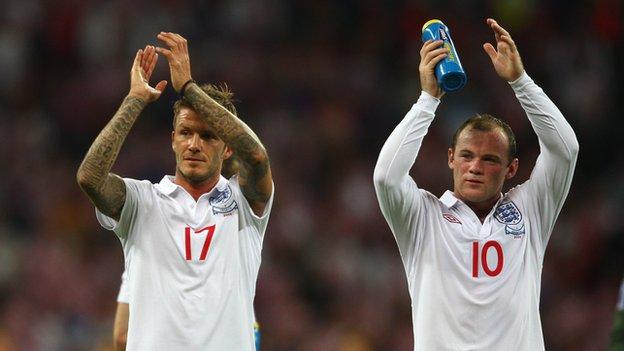 Fabio Capello was England manager for just over four years. Here is how his reign unfolded:

February 2008: Wins first match in charge, beating Switzerland 2-1 in a friendly at Wembley.

August 2008: After also trying out Rio Ferdinand and Steven Gerrard in the role, confirms John Terry as skipper.

September 2008: Stunning 4-1 defeat over Croatia in Zagreb, with Theo Walcott grabbing a hat-trick.

September 2009: England qualify for World Cup finals in South Africa with two games to spare after a 5-1 win against Croatia at Wembley maintains a 100% record.

October 2009: Suffers first loss in a qualifying game, 1-0 to Ukraine in Donetsk, when goalkeeper Robert Green is sent off.

February 2010: Strips Terry of captaincy after problems in his private life. Confirms Rio Ferdinand as his replacement.

May 2010: Launches the ill-fated Capello Index, a formula for assessing the performances of his players. Widely criticised by media and public alike.

May 2010: Names 23-man World Cup squad, including Liverpool defender Jamie Carragher, who comes out of retirement, and Ledley King, who is rarely fully fit. Admits he also made an attempt to get Paul Scholes to make himself available, which failed.

June 2010: Confirmed as England manager for the remaining two years of his contract.

July 2010: FA conclude their analysis and confirm Capello will remain in his job until after Euro 2012.

September 2010: England beat Bulgaria 4-0 in their opening Euro 2012 qualifier and follow up with a 3-1 away win in Switzerland.

March 2011: Re-appoints Terry as skipper, claiming the Chelsea man has been punished enough.

October 2011: England survive spirited second-half fightback by Montenegro in Podgorica to book their Euro 2012 finals place. Rooney is sent off and subsequently banned for three games.

November 2011: Final games turn out to be friendly wins over world champions Spain, and Sweden, whom they had not beaten since 1968. Terry captain for latter game, with Capello stating he is "innocent until proven guilty" of racism allegations.

December 2011: Rooney ban reduced to two matches, and one suspended, after Capello says he made a mistake by not taking the striker off.

January 2012: Disagrees with FA over decision to strip Terry of captaincy. Tells FA chairman David Bernstein in private, then voices his opinions on Italian TV.