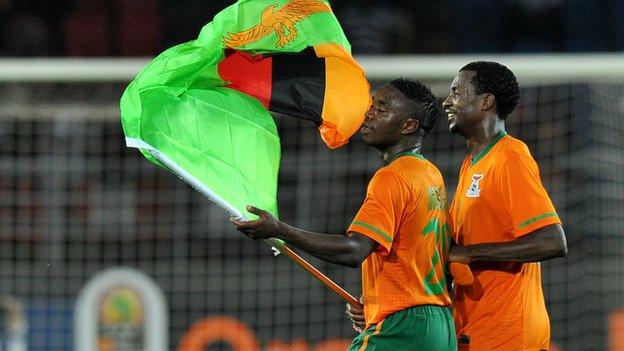 Zambia captain Christopher Katongo has hailed his side's progression to the Africa Cup of Nations final as their "greatest moment".

The Chipolopolo qualified for the final, in the Gabonese capital Libreville on Sunday, by beating favourites Ghana 1-0 in Bata.

The win sets up an emotional return to Gabon, off whose coast 18 Chipolopolo players died in a plane crash in 1993.

"We have to take this cup, this is an opportunity," Katongo said.

"This is the greatest moment ever a player can have to play in the final.

Obviously when we saw that the final is going to be in Gabon, we said this is our time, because that's where our brothers died

"It doesn't come every day."

Zambian midfielder Isaac Chansa, meanwhile, said he and his team-mates believe this year's competition is theirs to win, given the symbolism attached to reaching a final in Gabon.

"When we started our [training] camp back in South Africa, we started talking about [the tragedy of 1993] and we told each other that we think this is our cup," Chansa told the BBC.

"Obviously when we saw that the final is going to be in Gabon, we said this is our time, because that's where our brothers died.

"We think about that every time and we go on the pitch and give our best and give the people back home what they deserve."

Zambia's Emmanuel Mayuka came off the bench to score his side's late winner to shock the highly-fancied Ghana and help the Chipolopolo to their third Nations Cup final appearance.

It followed Ghana striker Asamoah Gyan's missed penalty in the first-half, which Zambia goalkeeper Kennedy Mweene palmed away to safety.

"We are sorry for the whole of Ghana for what happened today," Mensah said.

"It's unlucky that we lost this game.

"We promise them we will come back strongly next year [in the 2013 Cup of Nations in South Africa]."

Zambia will play Ivory Coast in the final on Sunday, after the Elephants beat Mali 1-0 in Libreville in the other semi-final on Wednesday.