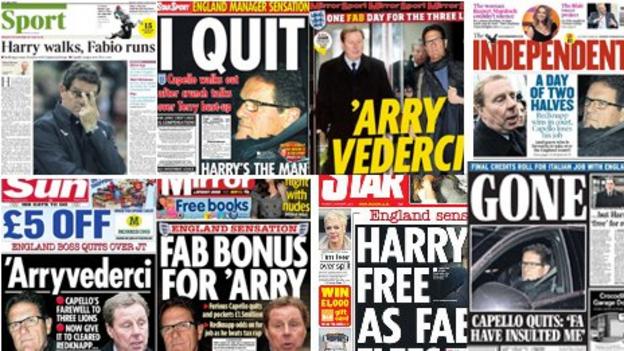 Newcastle manager Alan Pardew has ruled himself out of becoming new England boss but says he hopes the job goes to an Englishman.

Harry Redknapp will be offered the England job - but on the FA's terms. "The FA will tell Redknapp they want him to lead a coaching set-up with staff they have already picked as part of an England revolution".

Tottenham are braced for an approach from England for Harry Redknapp but are desperate to hang on to their manager until the end of the season.

Stuart Pearce and Sir Trevor Brooking will team up as caretaker bosses for England's friendly against the Netherlands at Wembley on 29 February.

Capello's replacement should drop both Terry and Rio Ferdinand from the Euro 2012 squad.

Spurs will make sure the FA have to fight to take Redknapp as England manager.

John Terry was a problem that never went away for Capello.

The decision to move Terry's trial date proved to be the fatal blow for Capello and the FA's relationship.

Capello's resignation came about as a 'perfect storm'.

The FA were right to sack John Terry and Fabio Capello was wrong to publicly back Terry, according to a specially-commissioned poll.

Barcelona are looking at ways of raising cash to fund a massive summer bid for Tottenham's £50m-rated winger Gareth Bale, 22.

Barca are not prepared to pay more than £35m and Bale wants to stay at Spurs rather than make the move.

Chelsea are believed to be lining up a £50m swoop for 25-year-old Atletico Madrid striker Falcao.

Liverpool are keen on Barcelona's Seydou Keita. The £2m-rated midfielder, 32, currently playing for Mali in the African Nations Cup, has been frozen out at the Nou Camp.

Bolton manager Owen Coyle is believed to have issued a "come and get them" invitation to Championship clubs for some of their out-of-favour stars.

Hamburg hope to tempt 22-year-old midfielder Gylfi Sigurdsson back to Germany when his loan deal at Swansea expires at the end of the season.

Several top clubs are already lining up to sign Blackburn's highly-rated 21-year-old striker Junior Hoilett, who could leave the club for a bargain price when his contract expires in the summer.

Striker Dimitar Berbatov, 31, expects to remain at Manchester United beyond this season but has reiterated his disenchantment at his lack of playing time at Old Trafford.

Arsenal striker Andrey Arshavin, 30, is holding on for a summer move back to former club Zenit St Petersburg rather than move to Anzhi Makhachkala over the next three weeks while the Russian transfer window remains open.

Anderlecht's 26-year-old striker Dieumerci Mbokani is being targeted by Liverpool. The 26-year-old's agent has also admitted that his client is being scouted by English clubs and could move abroad.

Jose Mourinho will not leave Real Madrid at the end of the season, according to midfielder Jose Callejon, 24.

Chelsea manager Roman Abramovich will oversee training at Cobham on a regular basis, piling more pressure on boss Andre Villas-Boas, after the cost of removing Carlo Ancelotti was estimated at £28m.

West Ham midfielder Ravel Morrison, 19, looks set to be hauled in front of senior Hammers staff to explain comments he made on Twitter.

Blackburn are believed to have have cancelled a visit from the Indian national team due to fresh fears over the future of boss Steve Kean.

French winger Sylvain Marveaux, 25, has admitted his season could already be over with Newcastle.

Swansea's 29-year-old midfielder Ferrie Bodde faces a fight to save his career after news that he has suffered a third cruciate ligament injury which will rule him out until next season.

The Brazilian club Corinthians are keeping their striker Adriano "detained" inside the team's hotel in an effort to force him to lose weight.

Manager Alex McLeish has urged French winger Charles N'Zogbia, 25, to do his talking on the pitch for Aston Villa rather than on Twitter.

The now world famous 'Anfield cat' may have found a home after a former Liverpool steward came forward claiming he was a local stray - and he's named after manager Kenny Dalglish.