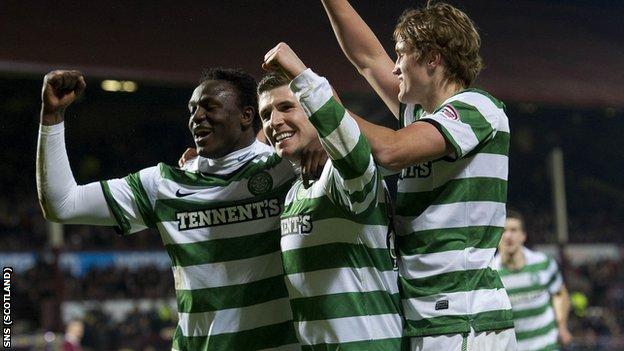 Manager Neil Lennon hailed the 4-0 win at Hearts as the best performance he has witnessed from his Celtic team.

"Probably (the best) in my time as a manager," he said. "I thought we were devastating, powerful, quick on the counter-attack and the intensity and quality of their play was exceptional.

"There is a long way to go but they are growing and that was a big test for us.

"I feel for Hearts a bit because they lost some big players before the game but they caught us on a good night."

Celtic's 13th consecutive league win lifts them four points clear of Rangers at the summit of the Scottish Premier League.

Seconds after Stephen Elliott's second-minute header appeared to cross the line before being scrambled clear, Celtic skipper Scott Brown drove in the the opener.

Midfielders Victor Wanyama and Joe Ledley added goals before the interval and striker Gary Hooper concluded the romp on the hour mark with a close range finish.

"It was all there tonight, the intensity, the atmosphere, the pace of the game, a good pitch to play on, I think the players relished the challenge," added a delighted Lennon.

"That is the standards we have set ourselves but I don't expect them to play like that every week.

"But we wanted to put pressure on those chasing us."

Lennon did admit his side were let off the hook when referee Willie Collum and his assistant Andy Tait failed to see Elliott's header had crossed the line.

"I think we copped a break," he said. "Judging by the cameras it looks like it is over the line and the only disappointing thing was we didn't deal with the initial header from the corner.

"Psychologically it might have given Hearts a lift. The ironic thing is we go down the other end and score the goal.

"But the reaction I got for the rest of the game was magnificent."