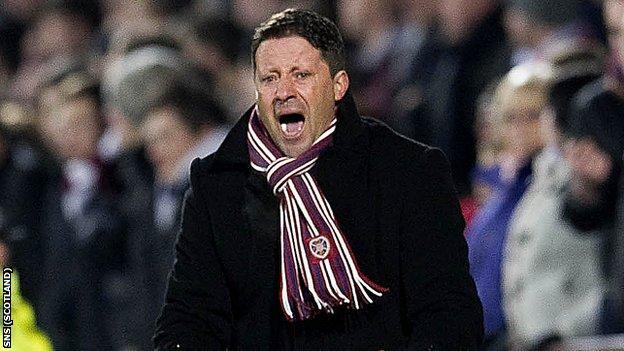 Manager Paolo Sergio was scathing of the match officials after Hearts were hammered 4-0 at home by Celtic.

The visitors opened the scoring seconds after a header from Stephen Elliott appeared to cross the line following an attempted block from Joe Ledley.

"We have been very unlucky with some decisions in the last three games and the referee didn't see it tonight.

"If you don't see the ball over the line then you should see the handball which is a penalty and a red card."

Celtic skipper Scott Brown finished off the counter-attack seconds after Elliott's weak header had been scrambled away by goalkeeper Fraser Forster.

Victor Wanyama and Ledley added further goals before the interval and Gary Hooper completed the scoring on a miserable night for Hearts.

"At Inverness we should have had a penalty," bemoaned Sergio. "Everyone saw it on television but no one on the pitch.

"We should have had a clear penalty in the cup game against St Johnstone.

"Nobody saw it again and tonight a goal. We were very unlucky but that's football, there are days like this."

Hearts made a strong start to the game, although they were guilty of losing their way after falling behind in controversial circumstances.

"We put Celtic under pressure," added Sergio. "But, without doing anything special, Celtic were winning 3-0.

"They had a counter-attack from the goal that wasn't given to us, with the second ball very lucky after bad control from Georgios Samaras.

"Some of our players lost their position complaining to the referee, and that doesn't help.

"Then it was another counter-attack with a ball we lost by our central defender (Marius Zaliukas).

"And at 3-0 the game is dead, decided. Then I was just thinking about giving minutes to players and saving others.

"We are playing every three days now and there is much to play for."